Even at one sixth of its real-life size an Armortek reproduction of a WWII Tiger tank is an impressive sight, especially since, like the real thing it’s made of steel, can manoeuvre over rough ground or through water and even ‘fire’ its gun with a satisfying eruption of flame, smoke and an authentic boom: A realism that customers of the Dunkeswell, Devon, based company have come to expect from one of the world’s top suppliers of scale military models.

Every year, Armortek, run by husband and wife team Mark and Gill Watkins, makes around 250 self-assembly kits of model tanks and other armoured vehicles. The company was founded in 2001 as part of a group of manufacturing ventures run by the couple and was originally based in Daventry in the Midlands. Last year they sold-off the other businesses and relocated the growing operation to the rolling hills of the South West.

Apart from the impressive Tiger, Armortek also makes Sherman and Panther tank kits, a scale Sd.Kfz 7 half-track vehicle and a Flak 36, 88mm gun. Across the range, the kits vary from low-end models for static display to top-of-the-range products with in-built motors and remote control systems. “Some of our customers prefer not to drive their models, but spend hundreds of hours recreating dioramas of actual events from the Second World War,” says Mark Watkins. “The attention to detail is stunning.” Those clients who want to ‘drive’ the machines can choose to supplement them with sound systems, smoke generators and gun barrels that use 12 gauge shotgun cartridges to simulate the effects of real tank cannon firing 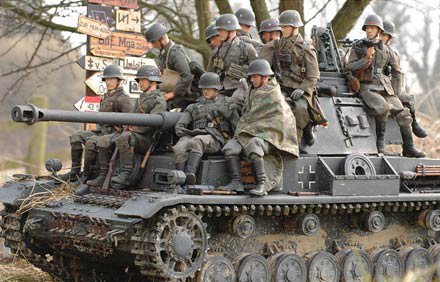 Armortek’s customers are, typically, military model-making enthusiasts from around the world. In fact 50 per cent of the company’s output is exported, mainly to the United States. “Some of them have a standing order for pretty much everything we build,” says Watkins.

To grow its business in the USA, the company is currently on the lookout for a local manufacturing partner: “Perhaps another Haas user with the capacity to help us better serve our growing US customer base.”

Irrespective of the way the models will be used all Armortek’s customers demand not just accuracy in the details and proportions of the models, but also – especially when they are used in harsh outdoor conditions – appropriate robustness. The build quality and the price of the models reflect their fidelity to the military specifications of their real life counterparts; a fully equipped model Tiger, for example, weighs 160 kilograms and costs in the region of £5,000!

To achieve the consistent manufacturing standards one would expect for what some might consider a very expensive toy has meant investing in reliable, high-productivity CNC machine tools from US machine tool supplier Haas Automation. The company – which in effect means Mark Watkins himself because he personally does all the machining work – currently operates three Haas machines: a VF-1 and a VF-3 machining centre and a TL-15 dual spindle lathe with a Servo 300 bar feed. The VF-1 was purchased in 2005 and the other two machines last year when the company relocated.

Watkins says that he works in batches of a hundred kits at a time with each batch taking three to four months to complete. He makes about two-and-a-half batches over a period of nine months or so. The other three months of the year are mostly taken up with research work for the development of new models, which involves seeking out examples of real machines in museums, photographing and measuring them and evaluating their potential as additions to the Armortek range. There are, Watkins explains, few if any relevant paper drawings still in existence for most of the models the company produces.

The next step in the process involves constructing a 3D CAD model of the parts to be machined using a SolidWorks software system. After that Watkins goes to work in his machine shop, programming the Haas machines directly using the CAD information as a guide and skills acquired during his time as a production engineer with carmaker Ford Motor Company.

Using steel, aluminium and occasionally brass, Watkins goes to great lengths to faithfully reproduce the scale size and thicknesses of the armour and the component parts of the real vehicles, many of which were protected by armour ranging from around 70mm to 100mm thick. Models may have plate steel skins from around 12mm to 16mm, which partly explains why the finished product can weigh so much.

Watkins says that actual machining operations are relatively straightforward and involve mostly drilling, milling and profiling routines. But that doesn’t mean that just any production equipment would have sufficed. Instead, he chose the Haas CNC machine tools after a careful evaluation of the options and for a combination of practical and business reasons including price, value-for-money, ease of programming and ergonomic efficiency.

“There are,” he says, “a lot of cheap, nasty machine tools out there and a lot of good, but also very expensive ones. Haas is the only reliable company in the middle ground. In my opinion, nothing does day-to-day machining as well.

“One particularly useful attribute of the machines is the quality of the control, which makes programming very easy.” The fact that the founder of Haas Automtion, Gene Haas, used to run his own machine shop is evident, Watkins claims, in the ease-of-use of the products: “They’re obviously designed with the operator in mind,” he says.

He also adds that the machines are well suited to unsupervised operation; an important consideration given the demands on his time as owner-manager, designer, machine programmer, etc. The Haas TL-15 CNC lathe can operate in a ‘lights out’ mode, thanks to its automated loading capability. Although both the Haas VF-1 and Haas VF-3 machining centres have to be manually loaded they can handle multiple set-ups and so can be left to produce batches of parts.

Equally important is the more prosaic but just as pertinent fact that after the machines have finished making parts they’re easy to clean and make ready for the next batch. “In a job-shop environment,” observes Watkins, “there is absolutely no point in having high speed rapids and tool changers if it takes forever to clean the swarf out of the machine.”

Armortek’s commitment to Haas CNC machine tools is reinforced by the fact that in preparation for the introduction of two new, but as yet undisclosed, scale models later this year, Watkins has already ordered a new Haas Super Speed VF machining centre. “I have no hesitation about choosing Haas again,” he says. “They‘re versatile, reliable, great value for money and easy to use. They’re the right tools for the job.” 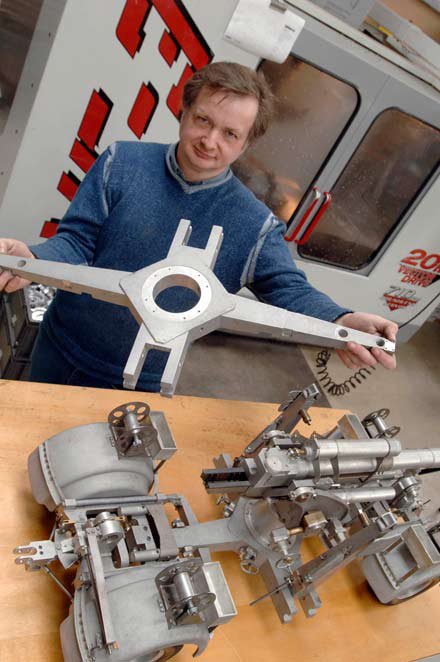 “We were eligible for a 30% grant and needed to provide the local authority with three quotes. We looked at several alternatives to the Haas machines, but we quickly concluded that we couldn’t do any better than the cost/specification of the U.S.-built machines,” explains Gareth.

“Also, others had recommended Haas to us – and told us that after-sales service was second-to-none. Reliability is hugely important to us. We’ve had issues in the past where we’ve been left high and dry. Once, one of our old mills broke down and it was over 6 months before we could get the spares and an engineer to get it up and running again. Another incident involved a power surge that killed one of the old lathes – we power all our machines from 3-phase generators, one of the challenges of setting up a precision engineering company in rural Wales – the lathe was deemed a right-off as getting spares was impossible. We haven’t needed to call out a Haas service engineer, but I like the peace of mind that there’s one just down the road from us, in case something does happen.”

“We’ve been really happy with our decision to buy Haas, concludes Gareth. “They’ve given us the quality and reliability we needed, and I know we’re going to be investing in more in the very near future.”