The Gulf of Mexico is one of the richest oil-producing regions in the western hemisphere. Over the years, the region has spawned a tremendous amount of work for Gulf State machine shops dedicated to oilfield work. Today, those shops are busier than ever.

Gulf Coast Machine, Inc., sits among Louisiana’s coastal bayous, about 100 miles west-northwest of New Orleans, in Broussard, Louisiana. The family-run shop is highly specialized, yet produces a common, but essential, oilfield commodity: threaded drill pipe. Screwed together end-to-end, this pipe forms the long drill “shaft” that is used to bore for oil. The indispensable threaded part looks simple, but Gulf Coast knows better – and they’re using the newest technology from Haas Automation to change the way it’s made.

Traditional oilfield machining may seem outrageous to the uninitiated. It’s certainly a different kind of work than most shops encounter. It’s often a mix of new production and old-part refurbishment, in materials with extreme variations of hardness. Parts are generally big, loading is usually awkward and jobs are frequently dominated by threading or re-threading operations. The work doesn’t quite fit the normal CNC-production category, so a lot of shops still do it manually.

“There’s definitely nothing delicate about it,” Gulf Coast’s owner Brad Stutes assures us. “Manual threading on a hollow-spindle machine is tough work. After turning handles all day on a job this demanding, you’re done! It’s hard on a machinist, and it’s hard on us – just finding experienced people to do the job – so we’re changing the way it’s done. CNC machines never get tired!” 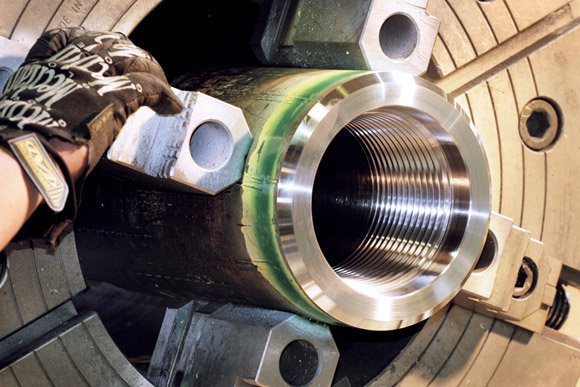 Director of Operations Kyle Stutes, Brad’s son, offers his point of view: “Actually, we don’t call it simple drill pipe anymore, we lump it into a category called drill-stem tools. We turn out a whole range of different tubular drilling tools, but threads are a crucial part of almost everything that goes downhole.

“As an example, Chevron has just made a big find offshore in the Gulf,” Kyle continues. “This one discovery may increase North America’s known reserves by an incredible 50%, but they have to go through 7,000 feet of water just to start drilling. Whenever their drill crew has to ‘make a trip’ (periodically pull out the drill ‘string’ to change the worn drill bit), that mile-and-a-half of pipe has to come out of the hole – one joint at a time. And nothing but a set of threads is holding together everything hanging below it.”

Since a “clean shear” due to thread failure anywhere along the string could strand millions of dollars worth of tools down the hole, the potential liability is staggering. To reduce these risks, the industry demands that each threaded piece is controlled and traceable (similar to aerospace parts), with a complete inspection and documentation “paper trail” back to the foundry. At the drill rig, an independent third-party inspector performs another critical ball-gauge check to certify, again, that the lead, pitch, taper and diameter of the threads are in spec. This independent inspection validates the shop’s work, and ensures there has been no damage during transit. Precision is essential, and with stakes so high, nothing is left to chance. 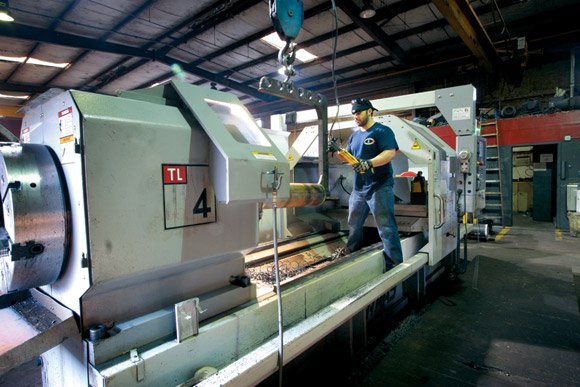 “My dad’s been in the oilfield machining and tool-rental businesses for 28 years,” notes Kyle. “He tells me he can’t remember a time when there’s been this much activity.”

“Oil is getting much harder to find,” Brad points out, “so the technology has stepped up to allow much deeper wells. That means a lot more tools are put into each drill hole, and that helps our industry. As the holes get deeper, the inspections get tougher; but there’s more manufacturing and a lot more repairs to do. It’s a crunch at times to keep up with what’s coming in.”

As problems go, too much work is a nice one to have. With business booming, father and son are tackling their situation head-on. They’ve invested in a pair of large-bore TL-4 CNC Toolroom Lathes from Haas Automation (Oxnard, CA). Featuring a 10.81″ through-bore, front and rear chuck capability and a 35″ x 80″ maximum cutting capacity, the machines are especially suited for oilfield operations. Gulf Coast purchased two of the first TL-4s to come off the Haas production line in California – and, Kyle admits, “These machines have changed everything!”

Oilfield shops have been cautiously adapting NC equipment since the late 70s, and Gulf Coast installed its first CNC machine, a Haas SL-30 lathe, back in 2001. But the large-bore TL-4 machines have stepped things up to a new level. They’re not only sized and powered for heavy oilfield work, they’re also equipped with Haas Automation’s latest Intuitive Programming System, which has built-in thread-repair and re-cutting cycles that make oilfield threading precise and, above all, easy. “This is a real breakthrough,” says Kyle. “Specialty CNC machines for our industry have never been this affordable, or anywhere near this easy to use.”

“We’re using Haas TL-4s to cut all our rotary shoulder connections,” Kyle explains. “One machine is set up to cut the box (the inside threaded part), and the other’s set up to cut the pin (the outside threaded end of the part). These are large, tapered threads with a heavy shoulder machined at the end. They’re called rotary shoulder connections, because the drilling crew joins the tubes by rotating the thread until the connection finally ‘shoulders-up’ tight.”

This happens repeatedly during drilling, and the parts are re-inspected each time a joint is broken apart. The crew may re-assemble connections three or four times, or sometimes use them only once.

“We continuously get damaged tools back from the field for re-working,” Kyle points out. “Training an inexperienced person to re-cut threads of consistently high quality on a manual machine can take a year or more,” he explains. “The trainee needs perfect timing and perfect hand-eye coordination, or he’ll destroy your machine just trying to learn. A split-second hesitation getting out of that course thread at the end will break an expensive insert – at the very least!

“This is where the TL-4s have changed everything; they’re being run very successfully by ‘green’ workers,” Kyle says. “I’ve got machinists who’ve been doing this work for eight or nine years on manual lathes, but the new guys on the Haas machines, who have less than a year’s experience, are turning out three to four times the work – and it’s 100 percent perfect. The TL-4s Intuitive Programming System makes threading just unbelievably easier. Some of my manual guys would kill to get on these new Haas machines. I honestly don’t know where we’d be without them.”

Kyle is excited about his shop’s prospects. “Our business has grown 400% in the last two years,” he says. “We want to get another TL-4 right away. We’ve got stuff happening!”

Brad, with long years in the business, views the new technology from a slightly broader perspective: “This machine is going to end up replacing the old dinosaur machinists in our industry. We all have a lot of respect for those guys, but it’s time – their breed is going away. This is absolutely the right machine, at the right time, to really help our industry.”

Standard NPT (National Pipe Thread) pipe threads are cut with a 0.75-inch-per-foot base taper, but drill-stem tools are cut to API (American Petroleum Institute) specs that call for a very steep 2- to 3.5-inch-per-foot taper. Drill-stem materials range from 4140 steel to Monel® to nonmagnetic stainless. Most of the new materials are heat treated to 300 Brinell hardness before machining, but used tools in for re-threading may be ten times that hard. Work hardening, previous shot-peening, extreme downhole temperatures and chemical exposure can deeply heat-treat the tube, or case-harden portions of its surface. “You never know what you’ve got during rethreading until you take that first cut,” says Kyle Stutes. “Then, the initial contact may blow up the cutting-insert.”

Another unusual challenge to threading 30-foot tubes is finding enough space to safely load and stabilize them. There’s no place to spin something that long in the shop,” says Kyle, “so we’ve cut openings through the shop walls behind each machine. We stabilize the tube on a roller station sitting outside, pick it up with air jacks, slide it through the lathe’s hollow spindle, then true it up with both the front and rear chucks.”

This machine is going to end up replacing the old dinosaur machinists in our industry. We all have a lot of respect for those guys, but it’s time – their breed is going away. This is absolutely the right machine, at the right time, to really help our industry.