Drilling for oil has never been as technically challenging as it is today; yet, petroleum exploration has never been more ambitious. Armed with new high-tech tools and groundbreaking technologies, crews are drilling deeper – much deeper – than ever before.

“We’ve developed and built a lot of the specialized downhole tools that modern oil drilling is based on,” explains Pat McJimsey, production manager of Stabil Drill in Lafayette, Louisiana. “But our primary product has always been drill-string stabilizers.” For nearly 20 years, Stabil Drill has been one of the industry’s major players. With a number of manufacturing and machining facilities along the Gulf Coast, as well as distribution centres in Newfoundland and Scotland, the company has long enjoyed an international reputation. Now, as a subsidiary of the global icon Superior Energy Services, Stabil Drill’s products are an integral part of many, if not most, oilfield operations everywhere in the world.

“The technology has certainly grown over the years,” notes McJimsey, “both out in the field and here in the shop.” Supervising the first run of a newly installed Haas Automation VS-3 vertical machining centre, McJimsey points out that the large-capacity machine and the giant 18-inch diameter by 100-inch long forging are indicative of the new trend. “As wells go deeper, their upper casings get bigger – and so do the stabilizers we make.” 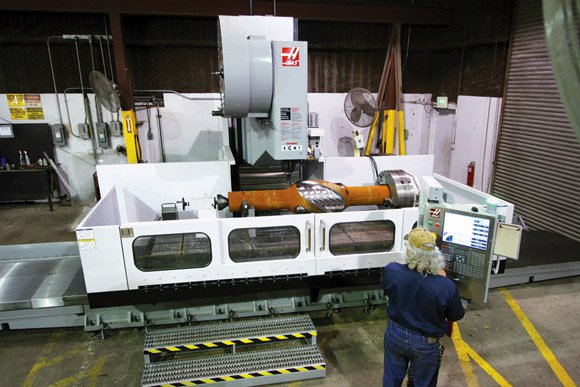 Deep bores inevitably expose the drill string to unpredictable working pressures and temperature extremes. They also penetrate more thermally unstable and potentially violent rock formations than ever before. This is where Stabil Drill’s primary product comes into play.

Since drill pipe is necessarily smaller in diameter than the boring bit, a long string can sometimes vibrate or “whip around” inside the larger-diameter borehole. This can distort the borehole’s shape, tighten the wall clearance or cause a variety of other serious problems. Unstable rock formations can make the situation much worse. The simple answer is to stabilize the pipe by placing finned spacers along the drill string at regular intervals. These stabilizers centre the pipe in the borehole, yet allow the drilling mud to flow back up to the surface. In practice, the solution can become considerably more complicated. Modern drilling crews include engineering teams who decide the exact deployment of stabilizing tools along the growing string. The stabilizers range up to 26 inches in diameter, and can weigh as much as 3,700 pounds each.

“Stabil Drill didn’t invent the downhole stabilizer,” McJimsey points out. “They’d already been around, in one form or another, since the 1950s. But our founder [now President and CEO], Sammy Joe Russo, envisioned a better way to make them, and in 1986 he started this company.” Today, Stabil Drill designs and manufactures a wide range of downhole tools, including weighted drill collars, hole openers and reamers, in addition to their array of stabilizers. 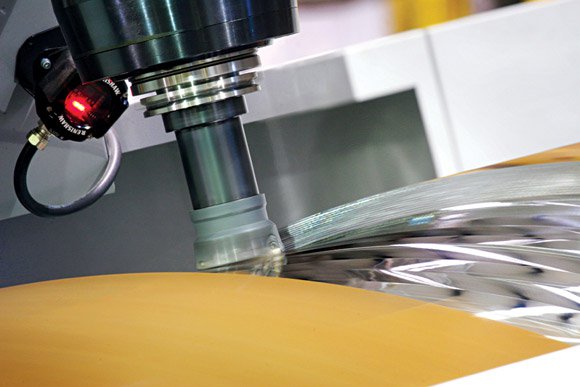 Most newly designed stabilizers have integrally machined spiral blades instead of the original product’s welded-on straight fins. The spiral blades help clear debris that can tighten the hole (reduce the diameter). By machining the entire part from a single large forging, Stabil Drill eliminates the possibility of a broken weld potentially stranding a multi-million-dollar drill string down an equally expensive borehole.

“We make larger sizes now than ever before,” says McJimsey. “And since they now often go through deep water, our clients want to make sure nothing can break off. The big one-piece, integral-blade units are stronger and more uniform; but to machine them, giant amounts of metal have to be removed. That’s why, as the parts got bigger, we transitioned the milling from manual equipment to new Haas CNC machines.”

With travels of 150″ x 50″ x 50″ (xyz) and a 10,000-lb table weight capacity, Stabil’s new Haas VS-3 easily handles the huge forgings required for the larger stabilizers. They specifically chose an open-enclosure Haas machine to simplify the loading and set-up of these cumbersome workpieces. “Full access to the entire table makes life a lot nicer,” says McJimsey. “And the cost benefits of getting this size machine at a good price made our choice easy.”

The machine’s large table (146″ x 40″) and the Haas control’s full 4th-axis capability allow Stabil to integrate a large rotary table and tailstock into the setup, allowing them to fully machine the blades in 3D. The VS-3’s gear-driven 50- taper spindle provides 450 ft-lb of cutting torque to power Stabil’s large-diameter cutting tools through an array of hardened materials.

“Stabilizers are mostly 4145-H steel,” notes McJimsey. “But for applications with MWD (measurement while drilling) telemetry, we use hard, non-magnetic material like NMS-100 or -140 stainless.” The biggest units start as 5,500 lb stepped-diameter cylindrical forgings. By the time the three spiral blades are precisely sculpted, the Haas machine has transformed a third of the huge mass into tiny heat-blued chips.

“The big forgings are expensive and hard to get,” McJimsey continues. “Lead times are anywhere from six months to a year for the steel, and even longer for the nonmagnetic. When we were cutting manually, each time we put a forging on a machine, we had a new opportunity to make a very expensive piece of scrap! And believe me,” he adds seriously, “no one wants to scrap a part of those proportions. The Haas CNC machines have all but eliminated that worry. Once we get a part perfected, we can rest assured that every one that follows is going to be the same. We’ve quickly learned that we can trust these machines.” 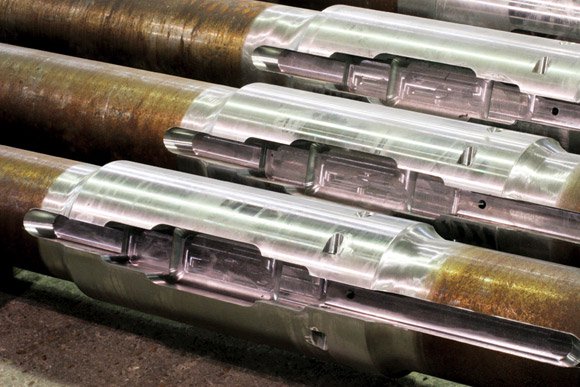 The Haas VS-3 that’s milling the large stabilizer was bought specifically to replace a manual horizontal machine that Stabil had owned for years. “The VS-3 is much easier to use, and that makes a big difference in our efficiency,” McJimsey declares. “Milling the blades in 3D instead of cutting pockets with a large shaped tool, as we had to do before, steps up everything.

“Simultaneous 4th-axis machining is a much better way to do this type of job. The spirals are completely uniform, and the total time is greatly reduced,” McJimsey continues. “Instead of taking 30 to 34 hours to machine, we’ll now cut the largest units in 12 to 14 hours! Since one guy can easily run two mills at once (each with two-and-a-half times the efficiency), we’re actually looking at a five-fold increase in productivity!” Because the cycle times on the 3D parts are long, the machinists are able to push Cycle Start on the Haas machines and walk away to do other jobs.

Stabil Drill uses the newest ceramic cutting-tool technology that has inserts set at a flatter angle. Instead of cutting with just the edge of the insert, they’re efficiently cutting the hardened steel forgings with the entire land. The tooling is cooled with through-spindle air instead of liquid coolant, to reduce the risk of thermal shock to the cutting edge.

The high-tech inserts still require some attention and periodic replacement, but the ability to program and maintain consistent feedrates and spindle loads on the Haas control allows the machinists to run at 250 ipm without worrying about pushing the inserts to failure. In the end, Stabil saves time and money, because the inserts need replacing far less often.

“Currently, I have all the Haas CNCs here in the production shop,” says McJimsey, “and we’re about to order more to keep up with demand. But our rental department shop is still all manual, due to the large volume of repair work they do to used tools. That’s going to have to change,” he predicts. “The labor pool here is barely large enough to support us at our current level. Experienced manual machinists are getting hard to find.

“We’re training most of the new workers ourselves,” McJimsey continues. “They’re students with good math and mechanical abilities who aren’t interested in college, but are interested in this industry – once they find out that modern CNC machinists don’t swing hammers and crank handles all day. The PlayStation® generation wants to play with computers. CNC is the definite future here.”