A Quantum Leap for Oil Production

In engineering, and manufacturing in particular, the concept of kaizen – the incremental, continuous improvement of a process, product or system – has for some time now been the way forward. A “bearish” approach, to use stock market parlance, but devastatingly effective, as Japanese auto manufacturers have consistently shown.

But whatever happened to the concept of the quantum leap? A dramatic improvement, a substantial change for the better, maybe even a paradigm shift. The bull to kaizen’s bear.

For example, imagine a single development that gave a ten-fold improvement in the efficiency of the internal combustion engine. Considering the number of cars on the road, how much energy would that save? What about ten times more power from jet engines? Cheaper, quicker flights for everyone? How about a silicon chip that could crunch ten times more data than the average? Definitely a quantum leap, even by today’s fast-moving standards.

In fact, a ten-fold improvement in almost anything would make most people sit up and take notice. Which is why oil company executives are sitting up and taking notice . . . of DynaPump. 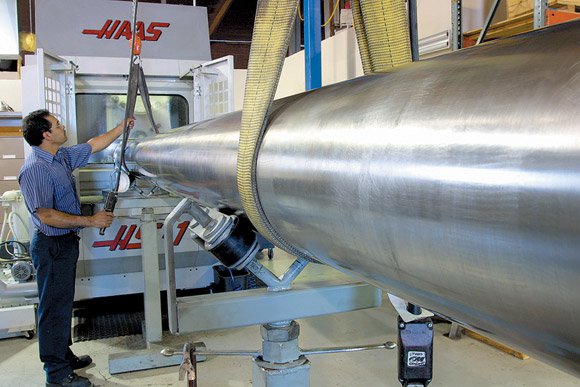 It’s All About the Money

When it comes to pumping oil, Allan Rosman, president of the Northridge, California-based company, is not a kaizen kind of guy. DynaPump’s range of computerized, triple-cylinder, counterbalanced hydraulic oil pumps brings new levels of efficiency to an activity that has remained virtually unchanged since American oil was first raised in the late 19th century.

“We developed the idea for the counterbalanced hydraulic oil pump in Europe,” says Rosman, “but in 1984, after we’d completed a study of the market, we decided to move to the U.S.” DynaPump Inc. was started in 1993.

“We use pressurized nitrogen as a ‘phantom’ counterbalance,” he continues. “This, combined with ultra-long strokes (up to 360″ for the larger pumps) and variable stroke speeds, allows us to pump a lot more oil than traditional beam pumps, using a lot less energy.”

For example, Rosman claims that the energy consumption of a DynaPump unit is one-third to one-half less than running an old-style pump. When you consider that oil pumps run 24 hours a day, every day, and that there are something like 2 million pumps in the world, it’s apparent that the potential energy savings are huge.

“Now, suppose the monthly power cost for a traditional pump is $8,000, and with a new DynaPump unit it’s just $1,000 a month,” says Rosman, “That’s already impressive enough. But now the production is also $100,000 a month more. The oil companies look at the total cash flow.” 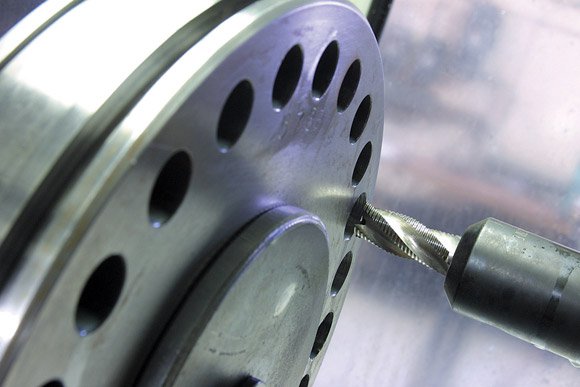 And just in case anyone doubts the validity of Rosman’s claims, the numbers are stacking up: DynaPump installations are already working hard in Southern California, where daily flow rates typically exceed 1,000 BFPD (barrels flowed per day). Indeed, some DynaPump units have smashed the world record for total flow from a hydraulic system.

And you can’t ignore the cost of maintenance: “The submersible pump is difficult to get to,” says Rosman. “Every two years, you’re looking at a $150,000 overhaul. We enter the fray and the annual maintenance cost is just $6,000. So you can see that the pumps pay for themselves very quickly. That’s why we’re talking about a new paradigm. Not just an improvement, a big jump. And, of course, it’s all about the money.”

Larry Smith, DynaPump’s vice president of manufacturing, has the task of preparing the company for an imminent and considerable increase in manufacturing capacity. One of the first decisions that he and Rosman made was to make the plunger (the long cylinder in the photograph below) the company’s specialty.

“As production is ramped up, we want complete control over this critical component,” states Smith. “So, we made the decision to bring the machining in-house. This is when we contacted Haas. With their help we worked out the processes, run times, tool changeovers, etc. When we’d finished, we felt good about the costs – we could buy the machines we needed, make these parts at the right quality and still make a profit.”

The Haas Factory Outlet (HFO) in Torrance duly delivered a Haas SL-30 lathe and a Haas HS-1RP. “We wanted the horizontal mill for the pallet changer and the productivity advantages it would bring,” says Smith. “We planned to bring more capacity on board as we needed it.” It quickly became apparent that the company was going to need bigger machines sooner rather than later, so an SL-40 and an HS-2RP were purchased last year.

The huge plunger arrives turned to size and is loaded into the Haas horizontal by means of two overhead hoists. “We’re facing, chamfering, drilling and tapping on the Haas HS-1RP,” says Smith. “Originally, we were planning to machine the plungers on a big, CNC long-bed lathe, but now we are convinced that the way we’re doing it is much better,” he states.

DynaPump was particularly impressed with the speed with which the Haas machines were installed and the support from the HFO and the factory.

“When we did have questions or difficulties, things were ironed out very quickly,” says Smith. “Also, because we are close to the factory, we had particularly good technical support. We’re pushing the envelope a little with some of these applications, so we had a couple of factory guys come over and check things out.”

For example, the big nylon pulleys they cut on the HS-2RP are made by a company in Seattle, and initially were being machined by a subcontract machine shop. To have more control over quality, and to make use of available capacity, Smith decided to look for a creative way to machine them on the HS-2RP horizontal mill.

“We’re also looking at other components we can bring back in-house, items that we use in the control cabinets, such as manifold blocks. We’re in the process of designing an integrated block (hydraulic manifold) in aluminum. These blocks are still in prototype form, but will allow us to dramatically simplify how we assemble the system.”

The Sincerest Form of Flattery

Not every fledgling manufacturing company has the advantage of being almost next door to an industry leader. “We are trying to buy American, wherever we can,” says Rosman. “We’d known of Haas for many years, although we’d never done business with them, and have watched the company expand.

“In a way, we want to follow in their footsteps. There are a lot of similarities between our products, our companies and the challenges we face. We‘ve learned a lot from Haas: Keeping the cost down, maintaining quality and manufacturing in high volume. We went to the (Haas) factory, we asked questions, we observed and we could see that, just because the product is less expensive, it isn’t compromised in any way.”

DynaPump is currently building a 300,000-square-foot factory that will allow production of 4,000 pumps a year. Rosman claims that Haas’ rapid expansion to more than 800,000 square feet provides an excellent model for how to cope with such dramatic growth.

Rosman believes that the question of whether to replace the old beam-type pumps is a no-brainer: “No one does an analysis of whether to buy an electric typewriter or a word processor anymore. It’s a waste of time,” he says. “There’s no argument and no need for analysis. The advantages are so great that no one buys an electric typewriter. The same will be true for our pump. That’s what I mean by a new paradigm.”

Although the public may perceive oil companies as being bullish organizations, the people DynaPump must convince are not typically known for rash decisions. “We have to show these people that the numbers for our machine are dramatically different,” says Rosman. “Not that the machine is different, because that doesn’t matter, but that the numbers are different. We come in with such different numbers that you can throw the old pump away and put us in.”

If the history and success of DynaPump’s Oxnard-based role model is anything to go by, it won’t take long for the decision makers in the global oil companies to realize: The oil pump is dead. Long live the oil pump.

So, we made the decision to bring the machining in-house. This is when we contacted Haas. With their help we worked out the processes, run times, tool changeovers, etc. When we’d finished, we felt good about the costs – we could buy the machines we needed, make these parts at the right quality and still make a profit.