Growing up in his father’s machine shop, Ron Gitlin saw first-hand the volatility of the traditional job shop business. So when he left home to pursue a career of his own, he had no intention of subjecting himself to that type of life. Little did he know that one day he would end up as president of his father’s company.

Triton Engineering & Manufacturing Company, Inc., of Boulder, Colorado, began life in 1946 primarily as a job shop, with the main focus being aerospace and defense contracts. For many years, lucrative government contracts provided a very comfortable living.

But such contracts required tremendous energy to procure and were apt to disappear without warning.

Triton didn’t really start dealing with the public or other companies until the early 70s, when several national research & development facilities moved to Colorado. Being the oldest continuously run machine shop in the area, these facilities naturally gravitated to Triton for their machine work

But Ron Gitlin didn’t want any part of the job shop environment.

He vowed not to follow in his father’s footsteps, but he still learned all the ins and outs of the business. Naturally, he learned to be a machinist and how to rebuild equipment, but he always used this knowledge toward his own interest – building trick parts for his race bikes. 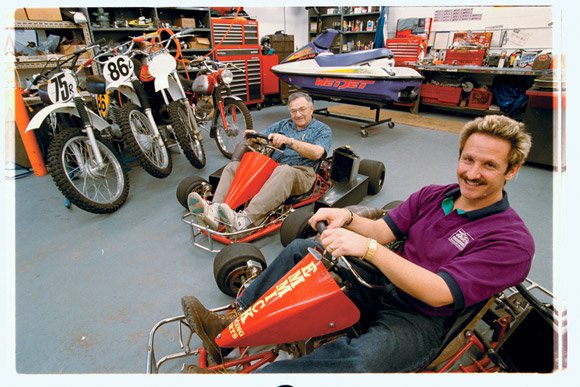 Race bikes were his passion.

At the tender age of 19, Gitlin headed to California to seek fame and fortune as a professional motorcycle racer. Plying the dirt oval was his life’s ambition – but working at a motorcycle dealership paid the bills. For two years he chased his dream. But alas, a professional racing career was not to be. Despite reaching AMA expert level, the number-one plate and factory sponsorship remained out of reach. “I realised I was never going to be good enough to be anybody,” Gitlin explained. “So I headed back to Boulder.”

Though he returned without a championship, the connections he made and the experience he gained – both on the race circuit and in the motorcycle shop – would serve him well down the road.

For the next several years, Gitlin worked at his father’s machine shop while also working as parts manager at a local motorcycle dealership.

It seems machining and motorcycles were destined to remain intimately entwined in his life. Despite this full plate, he also pursued a college degree during this time.

Degree under his belt, Gitlin once more left the crisp, clean Rocky Mountain air of Boulder in search of fame and fortune. Well, at least fortune. 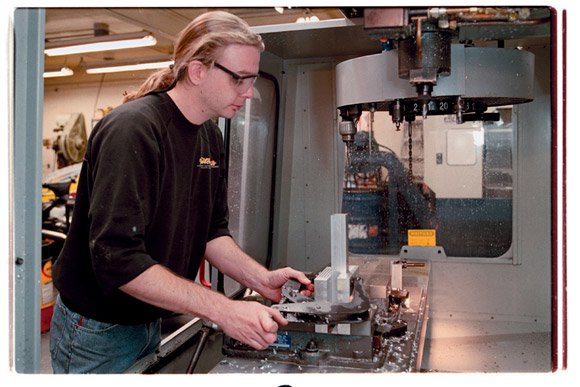 Alighting in Florida as general manager of a motorcycle dealership, his interest in motorcycles quickly expanded to include the growing arena of personal watercraft – Jet Skis, Sea Doos, Wave Runners and the like.

As with his race bikes, Gitlin was always searching for ways to make his new toys faster. At that time, however, the performance aftermarket for personal watercraft left a lot to be desired. “Being a customer myself of the existing companies, I saw the crap they were turning out and the prices they were charging for it,” he explained.

Realising the potential the market held for quality products, Gitlin combined his manufacturing know-how with his experience in the motorcycle and watercraft industries and began formulating designs for his own product lines. Working long-distance with his father, he prototyped his own performance cylinder heads and accessories for personal watercraft.

About this time, Gitlin’s father decided he wanted to retire. There was talk of paring down the business and selling it as a job shop, or just liquidating the business entirely. Gears began to turn in Gitlin’s mind, forming an idea.

He said to himself, “Wait a minute! We have an existing base – Triton Engineering – that is very strong, very knowledgeable and very capable. I think we can get into this industry and be a serious player right from the get go.” So back to Colorado he went to relieve his father and become president of Triton Engineering.

But what about the volatility of the traditional job shop business?

“I had no desire to come back and be solely in the job shop business,” Gitlin emphasized. “I didn’t want to sit there waiting to see if, and when, we were going to get a big aerospace package; or spend a lot of time and energy bidding huge projects only to miss the bid by $100 on a $40,000 contract. But I saw a tremendous opportunity to provide some stability by manufacturing aftermarket parts for personal watercraft.”

Putting his industry contacts and experience to quick use, Gitlin found distributors for his first designs and new products. “I already knew who to market the parts to, how to market them and what the shortcomings of the competition were.”

The products were an instant success, prompting Gitlin – and Triton – to branch out into other areas of motorsports. His contacts from racing and the motorcycle industry gave him a fast inside track to additional customers. Many of the people he used to race with – or against – were now team managers needing parts for their race bikes. They naturally came to someone they knew for their machining: Ron Gitlin and Triton Engineering.

Triton currently is the largest manufacturer of billet cylinder heads for the personal watercraft market, producing their own lines as well as private labeling for other vendors. They manufacture a variety of other products as well, such as velocity stacks, intake manifolds, fuel-injection systems, couplers, knobs and gas caps. What they call spruce-it-up or speed-it-up type products.

“By bringing on our own product lines, and also building my competitors’ product lines – which are our design, we just private label them – we added a tremendous amount of stability to our business,” Gitlin explained.

Now, 75 percent of Triton’s business is motorsports, with the remainder being high-tech job shop work. “We still do a lot of work for the national labs,” Gitlin noted. “Our true specialty, if we said we had to have one, is high pressure and high vacuum. We specialize in designing and building vacuum chambers and systems, and pumping stations, as well as cryogenic valves and systems.”

For Triton Engineering the combination of manufacturing and high-tech contract work has been a very profitable endeavor. But where do they go from here?

“That’s a difficult question,” Gitlin says. “I think a lot of it is based on my personality, and on what I do and don’t want out of life. I mean, living in Boulder is bitchin’. And at 37 years old, I’ve leveraged myself into a position where I earn pretty good money. I live in a nice house, and I have more toys than there’s time to play with. Between my motocrossers and my dirt trackers and my shifter go-carts and my Go-Peds and my watercrafts, I have a lot of toys and a lot of fun.

“To be honest with you, on the one hand I’m pretty content where I’m at. But is the business anywhere near as large or successful as it could be? No. If I were serious about radically growing the company, I think I could pretty easily spin it off into a couple different divisions and spend more time focusing on the ice climbing stuff we make. But everything’s a trade-off. The more successful you are in business, the more demanding it is on your time and the more stress it is. I don’t know if I want that.”

For now, Ron Gitlin is content to enjoy the stability of Triton’s manufacturing success. It seems he finally has his number one plate.

By bringing on our own product lines, and also building my competitors’ product lines – which are our design, we just private label them – we added a tremendous amount of stability to our business.