What’s particularly clever about those “reality” TV programmes seeking to root-out and nurture the pop stars of tomorrow, is that they aren’t just scouting for any old talent, they’re looking for the sort of talent that can be turned into huge and long-lasting commercial success. The wealthy impresarios behind such shows have well-honed instincts for potential, and when they find the person they’re looking for, they know precisely what’s needed to turn him or her into a marketable and profitable performer. Critics argue, of course, that it’s a formulaic approach to commercial success, but that’s precisely why it works: because there is a tried-and-tested formula. 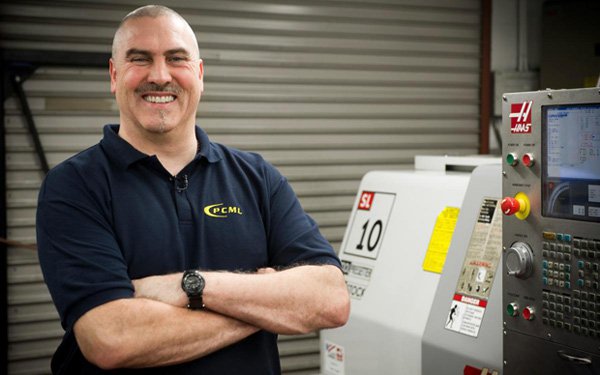 The senior management at Haas UK customer Precise Component Manufacture Ltd (PCML) would probably balk at the thought of being compared to the producers of a talent show, never mind the suggestion that their business model might be “formulaic.” But, seeking to systematically reduce risk and, as far as possible, guarantee future success, is exactly what they and the shrewd TV people have in common.

PCML began in 2000 as a group of four individuals, led by Managing Director Gavin Goates, each with their own particular skills and talents. Twelve years later, they could still be a group of four people, and they could still occupy just one of the industrial units at Fenland Business Park, March, near Cambridge. But they don’t, and there are several reasons why they don’t, and when you put them all altogether, they look suspiciously like a formula for success. Such as, for example, carefully controlled cash flow, rigorous quality procedures, and an obsession with supply chain management, including paying creditors promptly.

Business development manager Mr. Harvey Richards explains how, from the very beginning, PCML was a small firm organised as a large and successful one.

“In the early days, we were a subcontract machine shop offering limited services to a just a few, mostly local, customers. But,” he says, “we had a mission, and to be successful, we knew we had to have certain things in place.” Which included the right CNC machine tools, the subject of this article.

“Our investment in Haas machines began in 2001,” he continues. “We bought a Haas Mini Mill, which was followed six months later by another.”

These days, the company has an impressive array of Haas models, including two standard Mini Mills, eleven Super Mini Mills, six VF-2SS super speed mills, a VF-4, a VF-7, two Mini Mill 2s, an SL-10 lathe and, its latest acquisition, a DT-1 Drill/Tap machine. With annual turnover now in excess of £5 million, PCML today employs 60 people, and utilises every unit at Fenland Business Centre, except two, which are occupied by other business who also provide them with support services.

Customer focus, claims Mr. Richards, is the daily preoccupation at PCML. “The relationship you have with your customers has a profound effect,” he says. “By taking care of relationships, we also take care of our future cash flow, which means many things, not least that we are able to finance our own investments in new machine tools.”

PCML bought its first Haas early on in the company’s evolution. It had a small number of other machines on site, but wanted a compact-footprint mill with a BT40 spindle. Haas had recently launched the Mini Mill, and PCML installed one of the very first single-phase machines. Sited next to a machine from a Far Eastern manufacturer, the Haas repeatedly beat its neighbour on cycle times. “That very machine is still running today,” says Mr. Richards. 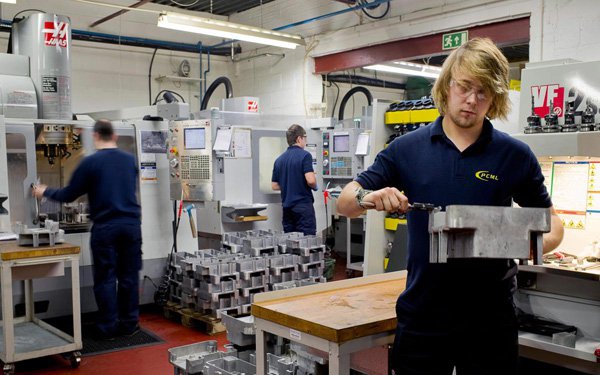 “If you want to know why we keep going back to Haas UK when we need another machine, then service and back-up are as significant as reliability,” adds Joint Managing Director Kevin Miller. “We’ve got one particular make of machine out there,” he says, pointing to the workshop door, “that I certainly wouldn’t buy again. We don’t discuss supplier problems with third parties, but I can tell you that, with some brands, it’s a nightmare getting spare parts! We have no such problems with Haas UK.”

With 19 Haas Mini Mills of various specifications on site, PCML is clearly an admirer of this versatile and best-selling machine. “Because we’ve grown so quickly, we are constantly re-jigging our shop layout, and with the Mini Mills, all you need are a pallet truck, a single-phase power supply, and air.

“When the business was growing fast, we thought, Oh! we’ll have another Mini Mill,” says Mr. Miller. “We were ordering them in two at a time. I recall one medical project – a spinal implant component for a U.S. customer. We had made five prototypes, and the customer phoned and asked for a thousand more. I called Haas UK and asked how quickly they could supply two more Mini Mills. They said ‘tomorrow,’ so I placed the order there and then. The value for money that Haas machines offer is exceptional. I was paying more for machine tools 25 years ago than I am today, and I get a lot more for my money in terms of performance.”

PCML describes itself as a contract manufacturer of complex, precision components for high-technology growth sectors, such as medical devices, semiconductors, ink jet printing, analytical equipment, electronics, and life sciences. The company has benefited from its location close to Cambridge, a hotbed of ideas and innovations.

“There are a lot of very clever designers out there who come up with some wonderful new products, but unfortunately, they can’t make them, because they are too complicated,” says Mr. Richards. “We often see designs that are physically impossible to machine. We spend more and more time talking with designers at the concept stage of a new part or product, offering our advice and guidance on manufacturability. Our intervention is at the beginning: at the product development and prototyping stage.” 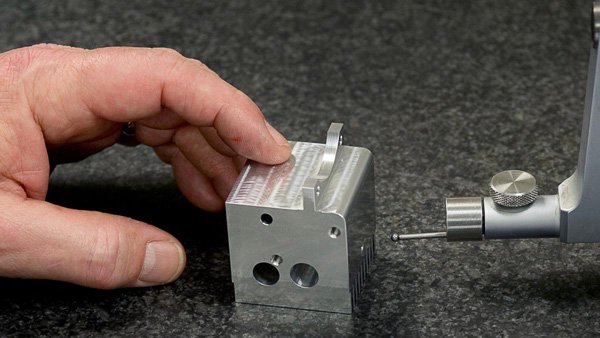 Even well managed companies were caught out by the credit crunch in 2008. To illustrate how PCML thinks like a big company, it’s worth considering how it responded to the worst economic conditions in living memory.

“Customers were frightened to commit,” remembers Mr. Richards. “There was no credit, and everyone was thinking very short-term. The orders were still there, but they were only being placed when absolutely necessary, at the last minute, and with the expectation that suppliers would be able to provide parts immediately, which of course isn’t realistic. It made scheduling very difficult, indeed.”

PCML senior managers got together and “thrashed out” a 10-point plan, designed to help ease passage through the credit crunch, for both PCML and its customers. At that time, the company witnessed advance orders dropping from a typical 18 months to just four weeks. To entice customers to commit to longer-term contracts, the company designed and implemented an MRP system, which made scheduling and planning easier and less risky.

“It was the perfect time to pass those advantages on to the customer,” explains Mr. Richards. “If our client gives us a 12-month contract, they can call components when required, and they only have to pay for them when they’re delivered. We will take the risk in return for a contract. Of course, such an arrangement provides other benefits, as well. One customer, for example, has achieved a 15% reduction in the number of components it needs to stock, tying up less capital.”

During the most challenging of trading conditions, PCML transformed itself from a job shop with dozens of individual machine tools, to a supply chain partner with a sophisticated and efficient scheduling system. “We now consider it one of our main missions to protect the supply chain,” says Mr. Richards.

The supply chain, customer relationships, and motivated employees are, says Kevin Miller, PCML’s three “magic” ingredients in the company’s success formula, and all, he claims, have a common denominator.

“Haas plays a role across all of these key areas. In terms of employees, we’ve got four apprentices now, and they use Haas machines at the local college. They’re at quite a high level. For instance, we will often leave them to program and run two machines at a time. Our apprentices are really important to us,” he adds. “They’re our leaders of the future.”

If the apprentices and operators work hard at PCML, then so do the Haas machines. Every minute is scrutinised by the MRP system, and all works orders are closely monitored. The bill of materials, tooling, fixtures, job plans, set-up times, and run times are all accessible from the shop floor, providing full traceability for customers, and minimising machine downtime.

In the arts, applying a formula can turn a fledgling performer into a populist moneymaking machine: a “success,” by most measures, but often one that offends the sensibilities of the discerning and the purists, perhaps because of its effectiveness.

In business, by contrast, commercial efficiency is usually the desirable aim of a formulaic approach to organisation: not an unfortunate side-effect, but a characteristic that can prevent, rather than assure, its eventual demise. Applied consistently, the right formula can turn today’s unknown into tomorrow’s star. 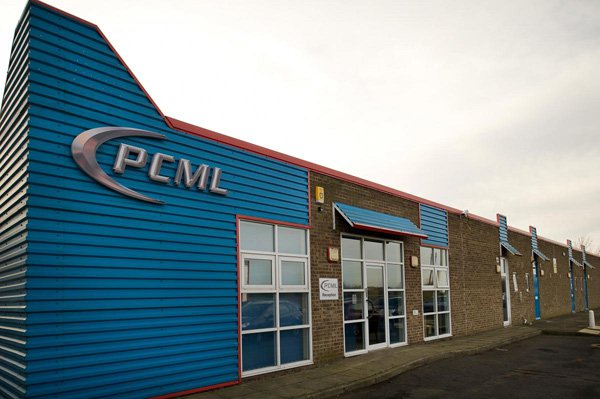