In the late 1700s, English scientist and engineer John Harrison won the government-sponsored Longitude Prize for designing and building a clock that could keep accurate time while aboard a ship at sea – a project that took most of his working life to achieve. For the first time, sailors were able to estimate their east-west position by the accurate comparison of Greenwich Mean Time (set on the clock) with local time (deducible by gauging the passage of the sun). Harrison’s original creation resides in the National Maritime Museum in Greenwich . . . which is where Robert Bray, owner and managing director of Yorkshire-based Sinclair Harding, spent 3 hours studying its movements, before building his own homage to Harrison’s genius.

“Our version of the Harrison clock is the Sinclair Harding H1,” says Bray, “a three-quarter-size representation that we started in 1999, and which took five years to develop and finish. It started with a visit to see the original. The curators at the museum won’t allow photographs, so the only way to replicate the workings of the original is to memorise them long enough to make a sketch.” 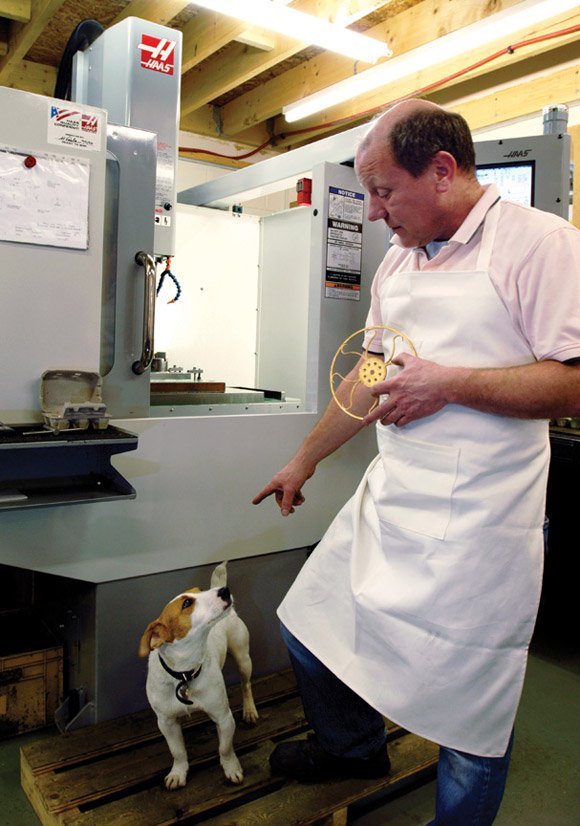 “The company was started in 1967 by a man named Mike Harding, and was originally based in Cheltenham,” says Bray. “My uncle, Brian Kitson, had a passion for clocks, and went to see Harding two weeks before the company was due to cease trading.” Kitson bought what was left of the company, which included its most important asset, its reputation, and not much else.

Little more than a decade later, the staff of the resurrected Sinclair Harding have shaped and polished that reputation into something as precious as one of its creations. Its many clients, including private collectors and prestigious jewelers, seem to agree: the company’s order books are in rude health [that’s good health, in British parlance].

“Every year, we exhibit at the big clock- and watchmaking show in Basel, Switzerland,” says Bray, “and every time, we come away with enough work for the next 12 months.

“We use traditional methods to build our clocks,” Bray adds, “but we also use the best available technology to make the component parts.” 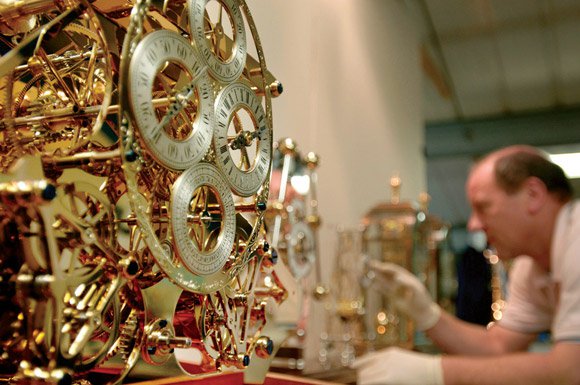 In the tightly packed industrial unit that Sinclair Harding calls home, sits a variety of machine tools, some ancient and well used, others as shiny as the day they were installed, such as the company’s Haas Mini Mill and Haas OL-1 Office Lathe.

“Before we bought the Haas machines, we compiled a wish list of functionality,” Bray recalls, “but we didn’t think we’d get everything we really wanted for the money we had available. I guess that’s why it was a wish list!” After the company’s relocation fell through, the idea of squeezing even more equipment into its already “busy” workspace seemed ridiculous. But it wasn’t just the size of the Haas machines that persuaded Bray he’d found what he was looking for.

“Within five minutes of using the Haas control, I was convinced,” he says. “It was so intuitive and easy to use. As soon as the machines were installed, we started transferring part programs. We thought the machines would be busy at least two days a week; they haven’t stopped since!”

Bray bought the Haas OL-1 Office Lathe as a second machine to support his main lathe. “As the workshop is very cramped, it’s the perfect size,” he says. “With the same control as the Mini Mill, it was quick and easy to learn.”

CNC machines have made the clockmaker’s task faster and less labour-intensive, but traditional craftsmanship – not dissimilar to the methods used by Harrison 300 years ago – still accounts for about 50 percent of the time taken to make a Sinclair Harding clock. 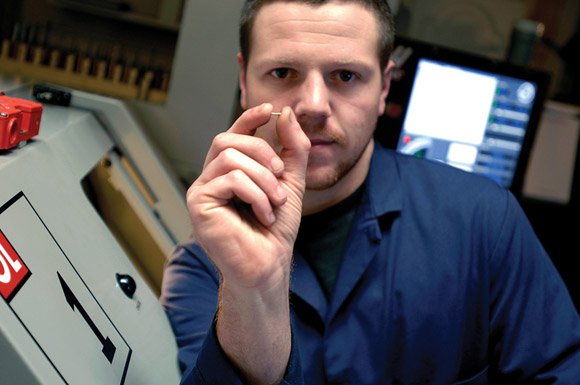 “Every last piece, even those you cannot see, is hand polished,” says Bray. “We also make springs from strips of brass, which we hammer out to give them the shape and spring qualities. Our dials are made of brass, engraved and filled with wax. We finish them by rubbing the dial with a concoction of silver nitrate crystals, salt and cream of tartar, which deposits silver onto the surface. It’s a very old process, and the mixture recipe is a closely guarded secret.” Sinclair Harding also builds movements for other, well-known manufacturers. “This is an important side to our business,” Bray explains, “but client confidentiality means it’s not something we typically talk about.”

However, Bray can reveal that he personally designed and made the clock that was presented to the Queen at the opening of the refurbished St. Pancras train station in November 2007. The shape of the clock reflected the architecture of the famous engine shed, and the dial was a faithful copy of the large clock in the station, which in turn is a replica of the clock made when the station was first opened in the 19th century.

One of the challenges was machining the 3-dimensional filigree around the outside of the dial. Bray made the drawings from a photograph of the original clock dial, and used CAM software from OneCNC to create the program.

“We were only making one piece at the time – there being only one Queen – from a solid piece of 1 mm-thick engraving brass,” Bray relates. “The blank is clamped through the centre and on the outside, and the first part of the operation is to engrave some of the detail at different depths to give the part a 3D look. I engraved the pockets and the inside diameter detail, removed the centre, re-clamped over the engraved filigree and engraved the outside detail.”

The original machining cycle took a whole day, but the company subsequently won a repeat order, and after much “playing around,” Bray got the time down to about 1 hour and 10 minutes. “Mind you,” he says, “the cycle times are not that important. There’s always plenty of hand-finishing to do while the Mini Mill is running.”

Within five minutes of using the Haas control, I was convinced, it was so intuitive and easy to use. As soon as the machines were installed, we started transferring part programs. We thought the machines would be busy at least two days a week; they haven’t stopped since!