When Rita Kocurek and her son David founded a business in 1979 on a former farmyard near Ipswich, even they couldn’t foresee the success that Kocurek Excavators would enjoy over the next 4 decades.

“Maybe to say we are worldwide leaders is too big a statement,” says a modest David Kocurek, “but we are pretty dominant in the market, supplying to major OEMs such as Hitachi, Caterpillar and Volvo as well as end users.” Much of the demand is from overseas, as far as the USA, Africa and Australia; with no one else able to match Kocurek’s performance.

In 1993 the company left the farm, moved two miles down the road to a two-hectare site – previously owned by BT – and invested heavily in buildings and equipment, constructing its own purpose-built facility for the manufacture of excavator front end equipment. Three expansion phases later, the company continues to grow, as does the physical size of its products.

“We used to work on 20-tonne excavator equipment,” says Kocurek, “but now 40, 60 and 80 is just as commonplace. The largest we’ve supplied is a Hitachi 120-tonne, 50m high telescopic demolition machine.

“Of course,” he continues, “to expand in such a way requires constant investment in new machine tools. In fact, I’d say that the biggest challenge we’ve faced in recent years has been to improve and automate our machine shop.”

Which is something he has taken a very active role in. David Kocurek may be the company figurehead, but he still spends most of his working time in a pair of overalls.

“Our Haas machine tools have played a key role in our success,” he says. “We’ve dabbled with other makes of machine tool, but since we invested in our first Haas I’ve become a real convert, they’re excellent machines.”

And his enthusiasm for the US built range of machines isn’t just reserved for the hardware. He has high-praise for the UK distributor, too.

“We’ve had ‘rocket’ service from Haas UK,” he enthuses. “On reflection, it makes the service we receive for our other machine tools seem rather poor. In my opinion, if the price is right, selling a machine tool is partly academic. It’s afterwards – whether a company will come back if there is a difficulty – that really makes the difference. I’m now a Haas man through-and–through.” 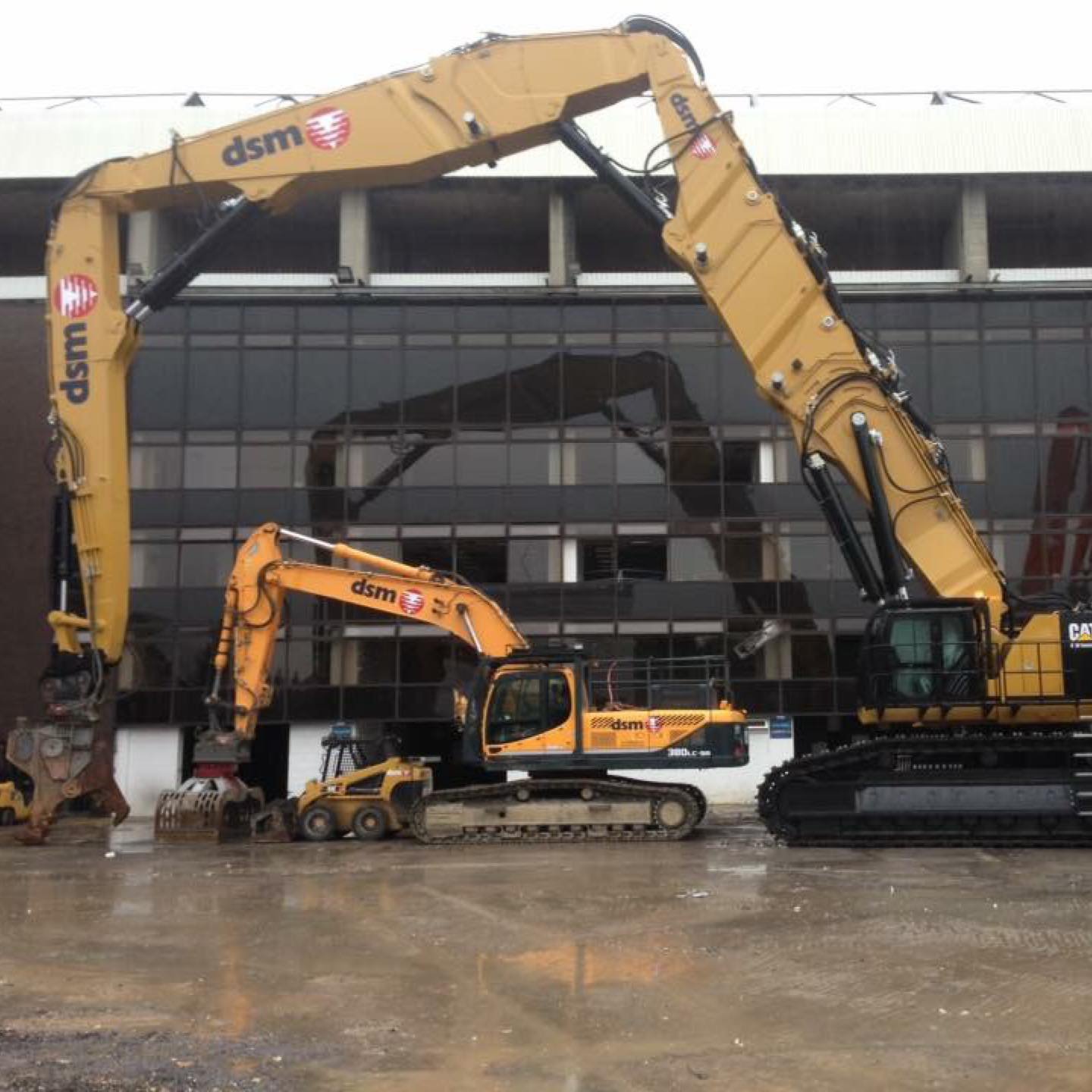 Kocurek now owns seven Haas machines, adding another VF-2 in October 2017 and recently a VF-4, 40-taper vertical machining centre, together with an ST-30 lathe to work alongside the original 4. “A lot of our parts require heavy metal removal,” says Kocurek, “plenty of face milling, roughing, etc. Our older Haas mills work as hard as the new models, but we’ve never had any serious problems and they’re still just as capable of producing high accuracy work as they were when they arrived here.”

However, it’s Kocurek’s Haas CNC turning centres that are really impressing. The ST-30 features a sizeable headstock casting with symmetric ribs for rigidity and thermal stability, ideal for the high metal removal rates at Kocurek.

“We mainly use it to manufacture hydraulic fittings with hexagonal features,” says Kocurek, “a 4 operation job prior to the TL-15, but can now be achieved in one-hit. It’s easy to program and we can leave it unattended without concern. It never falters, running for up to 15 hours a day, producing batches of around 300 at a time.” 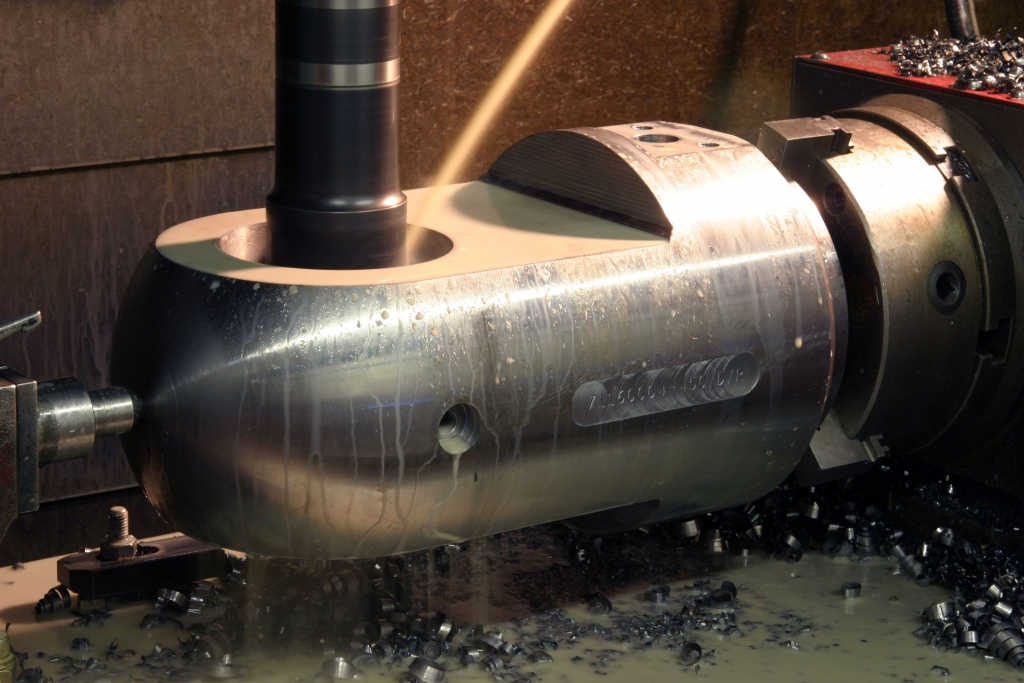 No margin for error

Kocurek’s range of specialist front-end equipment can be divided into three broad classes: long reach excavators; materials handling excavators (grab machines); and high reach demolition excavators – all conceived and designed in its development department. One recent project was to work with DSM Demolition, designing a range of bespoke booms, fitted to a CAT6015B high reach excavator. These arms were created to support 3 different configurations with a maximum reach of 70 meters, to be used in the demolition of White Hart Lane stadium, the former home of Tottenham Hotspur Football Club. The machine weighs 225 tonnes, including an attachment weighing up to 2,500kg. By reducing the boom size, it can it can operate a 7,000kg attachment at up to 38 metres, at the same weight, with its final 32-meter configuration allowing the 230 tonnes unit to use a 12,000kg attachment. All of this would not be possible without Kocurek’s custom-built engineered components.

Ben Woollard is a CNC programmer and machinist at the company. On the day the first Haas VF-4 arrived in 1998, Woollard had little practical experience with CNC machine tools. After a two-day training course at the Haas UK Technical Centre, however, he knew everything he needed to know to start putting the machine through its paces.

“The Haas Quick Code has helped me out a lot,” says Woollard. “It makes programming so easy.”

He now works alone, keeping the Haas mills and lathes running simultaneously; a testament to the Haas control’s ease of use.

“One of our main criterion when we looked into CNC machine tools was to de-skill the job,” says Kocurek. “We wanted machines that didn’t rely on a highly qualified operator. Because the Haas machines are easy to program and reliable we’ve achieved two things: fewer skilled people and fewer people in total.”

And while the machines are excellent for production work, Kocurek also claims that one-off part production on a Haas machine is actually easier than doing the job manually. 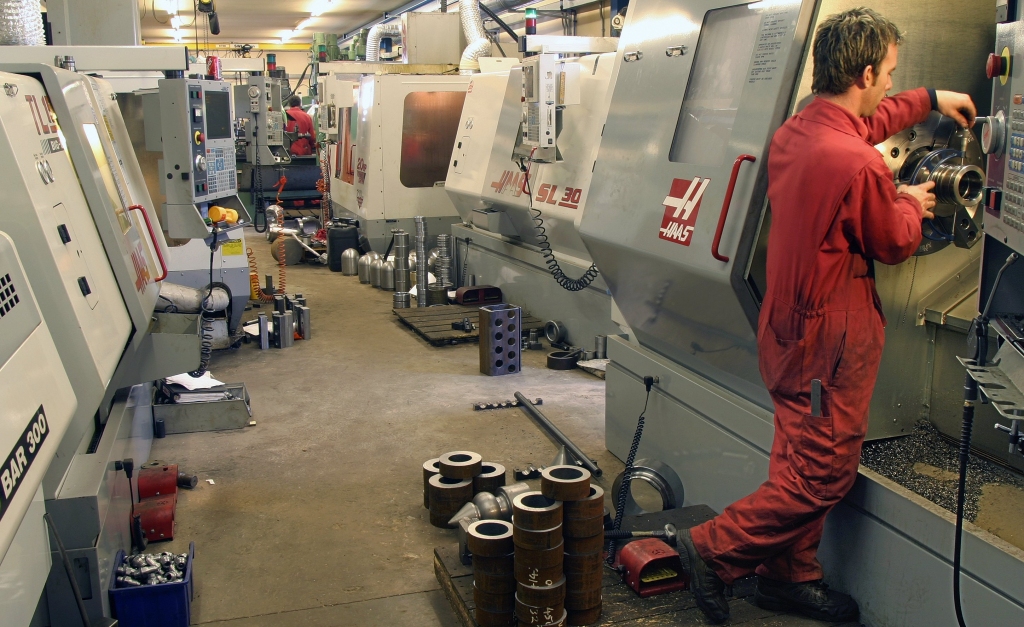 “I can ask Ben to produce a part and 20 minutes later it’s my hand – that’s down to the simplicity of the control. It makes a Haas such a joy to use.”

Woollard has especially enjoyed putting the newer machines through their paces “The VF-4 and ST-30 are so quick.” he remarks. “The programming is just the same but the rapid movements and cycle times are faster than ever.”

The performance and simplicity of the Haas machines implies that Kocurek Excavators can be equally quick to react to the market it serves; something the company uses to its advantage. David Kocurek feels that responsiveness is a by-product of his company’s general approach to investment.

“We don’t draw money out of this company,” says Kocurek, “we use it to invest and to make a better product, faster– that’s our policy. Our Haas machines are a good example. They’re superb. They offer great performance and tremendous value for money. Without them, we wouldn’t be where we are now.” 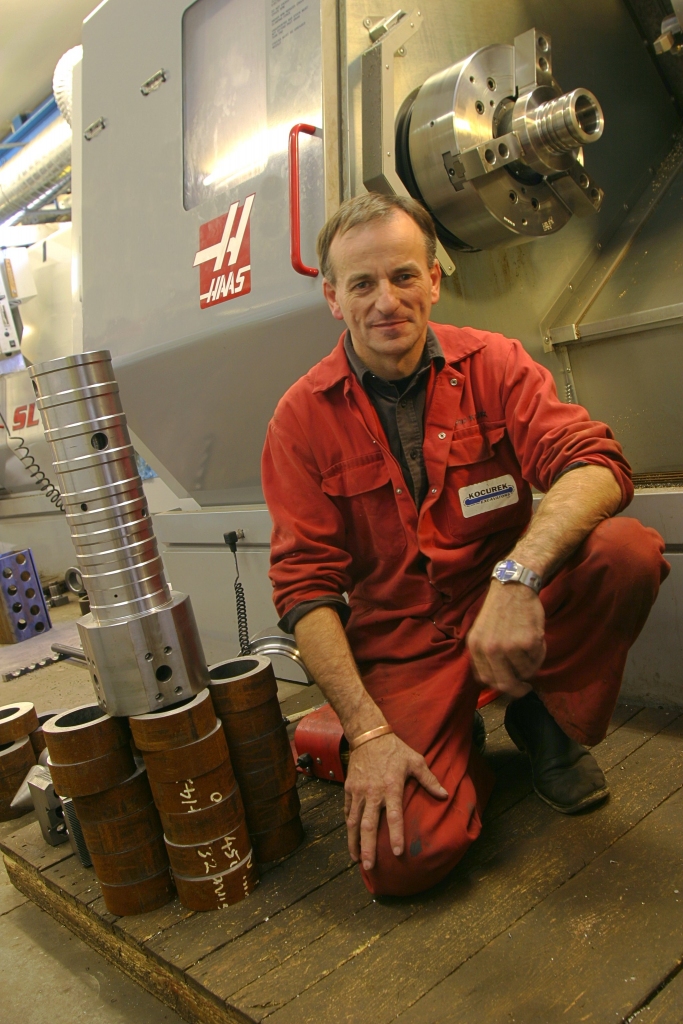 “We used to work on 20-tonne excavator equipment,” says Kocurek, “but now 40, 60 and 80 is just as commonplace. The largest we’ve supplied is a Hitachi 120-tonne, 50m high telescopic demolition machine.”

“We don’t draw money out of this company,” says Kocurek, “we use it to invest and to make a better product, faster– that’s our policy. Our Haas machines are a good example. They’re superb. They offer great performance and tremendous value for money. Without them, we wouldn’t be where we are now.”