When a company calls itself Craftsman Tools, its customers have high expectations. Fortunately, for the Yorkshire-based company in question, there’s a machine tool builder that’s equally confident when it comes to providing quality and reliability. They make a winning combination. Machining contracts worth approximately £1 million per annum do not arrive every day. When they do, such high-profile orders typically come with high pressure, and to have a chance of successfully managing and processing contracts of this magnitude, manufacturers need reliable, fast, robust and accurate machine tools. 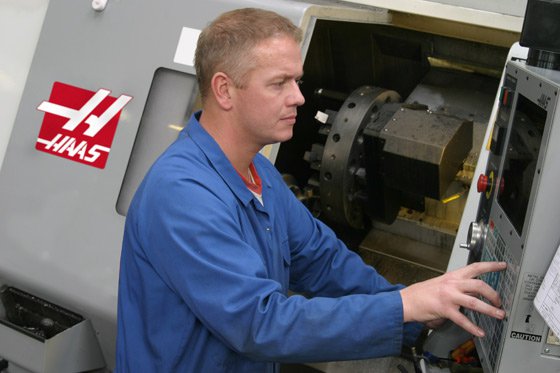 So, when Otley-based Craftsman Tools Limited* won an order to supply internal pump components to Sulzer Pumps UK in Leeds, it knew it would be able to rely on its recently acquired Haas turning centre with live tooling. *Craftsman Tools Limited is a precision toolmaking company situated in Otley, West Yorkshire, United Kingdom. The company operates as Chevin Tools in the United States, and as Craftsman Tools throughout the rest of the world. The company is not associated with Sears Roebuck in any way. “We bought the Haas lathe as we were machining thousands of turned parts that required a second operation,” explains product manager Brian Teasdale.

“Parts would wait next to a manual milling machine simply to have a single hole or slot added. Whereas now, we can complete parts in one hit, thanks to the driven heads on the lathe. We no longer have scheduling bottlenecks on secondary machines, and delivery performance in our subcontract machining cell has improved from 75 to 98 per cent.” The components for Sulzer Pumps are relatively complex parts manufactured from abrasive materials such as Duplex, a high chrome content nickel-steel. Such is the scale of the Sulzer contract that it keeps the 432 x 864 mm (17″ x 34″) capacity Haas lathe busy for 51 weeks of the year on a double-shift, 16-hours-a-day basis. “Everything we manufacture for Sulzer goes straight to their production line,” adds Teasdale. “They don’t inspect the parts; we have to guarantee that everything is correct, as well as certified for traceability.”

With so much riding on successful component manufacture, there are high expectations of the company’s Haas lathe, and not just from Sulzer. The cost and long lead-time associated with the raw Duplex material means that any scrap is both expensive and time consuming for Craftsman Tools. Prior to purchase, Haas presented Craftsman Tools with the opportunity to see the lathe in action at two other manufacturers in order to help the company reach a decision.

“Since we bought the machine, it has done everything that we have asked of it,” says Teasdale. “We opted for the Haas lathe because it had all the ability of so-called high-end turning centres, at a much better price. It is extremely fast, and repeatability is second to none – holding tolerances of less than 0.025 mm. It has been a very successful machine for us. In fact, in terms of cycle times, the lathe runs consistently at 125 percent – actual versus planned.” Sulzer too, is very satisfied. In fact, the company no longer operates an in-house machine shop, preferring instead to outsource to selected contract manufacturers that it knows have the capability to meet its demands. The success story, however, does not end there, as Teasdale goes on to explain. “Thanks to the Haas, we have managed to eliminate grinding from some of our jobs.

The quality of the finish machining, and the fact that it can turn material as hard as 48 Rc, has allowed us to make a substantial cost saving.” Craftsman Tools has also owned a Haas VF-3 vertical machining centre for the past six years, and since the addition of the Haas lathe, the company has capitalised on an unforeseen benefit. “Because the two controls are so similar,” explains Teasdale, “we are able to deploy operators to look after machining centres and turning centres.”

This is quite a feat for manufacturing disciplines that are traditionally so divided. It means that Craftsman Tools is able to reduce its cost base through a reduction in labour content. “When we were looking at turning centres, one of the overriding factors in favour of the Haas lathe was that the control was so much simpler than anything else on offer. We still say that today; it is very simple to learn.” The simplicity of the control is verified by lathe operator Mark McLaren, who says “the control makes such a difference,” before stating that the addition of the live tooling and the tool probe make the machine a far more effective solution than the lathe it replaced, especially considering the lathe can be subject to as many as 15 jobs a day over a double shift. Also impressed with the Haas control is VF-3 operator Simon Binns, who says he constantly makes use of the Haas Quick Code programming feature to rapidly generate finished part programs. Both operators regularly “swap” machines when required.

Armed with a selection of material, Craftsman took a trip to the Haas showroom in Leicester to see the VF-3 in action. It proved to be a decisive moment in the purchasing process. “We tend to take large cuts, so vibration can be a problem for us,” says Teasdale. “However, we needn’t have been concerned; the trials showed that the rigidity of the VF-3 was superb. The big cast frame is a lot more sturdy than on models from other suppliers that typically use fabricated frames.”

The VF-3 at Craftsman Tools, with its 1016 x 508 x 635 mm (40 x 20 x 25 in) capacity, is generally set up with a vise, chuck and rotary indexing table to offer maximum machining capability and flexibility. “The VF-3 has been put through its paces over the years,” Teasdale says. “We do a lot of jobs that require quick setup and quick programming, and the VF-3 lends itself to these very well.” In fact, such is the impact of the vertical machining centre at Craftsman Tools that the company says it will seriously consider Haas machines when one or two of its other milling machines reach the end of their serviceable life. The reliability of both Haas machines has been exemplary.

Teasdale says that downtime of the lathe can be calculated at just one day, while in six years of constant use, the VF-3 has required just one replacement part. With a total of 14 CNC machines operating at Craftsman Tools, Teasdale declares that the non-Haas machine tools require far more attention: “I wish all of our machines were as reliable – we have a lot of breakdowns,” he says. Haas UK, however, is more than prepared for the rare eventuality of machine failure. For instance, within a 30-mile radius of Otley-based Craftsman Tools, the company has three service engineers who can be dispatched to aid the company in an emergency. “This is important to us, as machine cost rates are quite significant and we can’t afford to have much downtime,” explains Teasdale.

“Service does have a role to play in the decision to buy.” Applications support is also a major strength of the Haas UK operation, a fact not lost on CraftsmanTools. “One recent challenge was tapping some extremely large holes that, normally, would have required a huge motor to pull exceptionally big cutters. In the event, Haas UK application engineers produced a special macro to thread mill the parts on the lathe, using the C axis, X axis and the live tooling.” Another first, the company claims, achieved by its team of Leicester-based, factory-trained applications engineers.

Since our visit to Craftsman Tools, the company has acquired yet another Haas machine: an SL-40 turning centre with live tooling and C axis. The 1118 x 648 mm (25.5 x 44 in) capacity of the SL-40 allows Craftsman to take on even larger work, and the live tooling eliminates the need for secondary operations on another machine. The result is yet another increase in productivity while further reducing labour content.

The trials showed that the rigidity of the VF-3 was superb. The big cast frame is a lot more sturdy than on models from other suppliers that typically use fabricated frames.