Home / Videos & More / Our Customers / Automotive / The Evolution of Morgan

The Evolution of Morgan

How many British-owned motor car manufacturers can you name? Mike Excell of Metalworking Production Magazine in the U.K. visits a famous survivor, and finds that the secret of success is managing change, while maintaining the core values which have made it one of the most enduring names in motoring.

Morgan Motor Company (the last genuine sports car builder?) moved to its present Malvern Link site in 1918. Externally, things probably haven’t changed much. Glimpses of ash frames and gleaming chrome through open workshop doors, and hill climb posters in the lobby, evoke an England which perhaps never really existed, but ought to have done: a comfort zone where the roads are always open, and the soundtrack is forever Elgar.

But Morgan, inseparable from its sepia-tinted imagery, is also the model of a modern, market-oriented company. It provides customers with what they want – including the exclusivity of a car for which the wait is part of the deal. Market awareness also means responding to external market conditions, like changes in legislation. Adapting to circumstances without losing core values is never easy; Morgan appears to have mastered the trick. 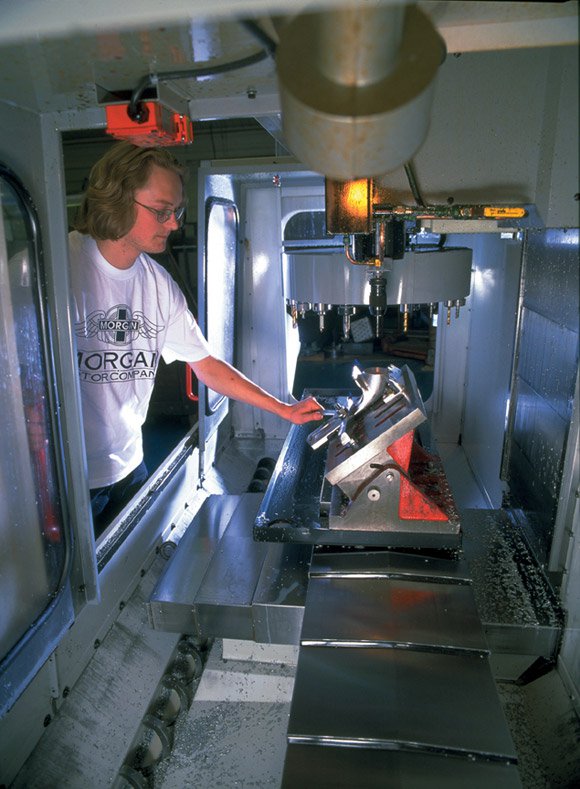 The company was founded by “HFS” Morgan in 1911; by the 1920s it was one of Britain’s largest manufacturers, building fifty three-wheelers a week to meet growing demand for inexpensive transport. The 1930s introduced mass production to the car industry, and the “light car” market contracted. Morgan responded by building on the sporting heritage which underpins the current range. Nowadays, it’s a niche manufacturer, producing 500 cars a year under the helm of Peter and Charles Morgan.

In late 1997 Morgan invested in its first two CNC machines. Assistant managing director Mark Aston puts this in context. “We had a very set production system, but a few years ago we made a big change, partly driven by Environmental Protection Agency regulations. We were going to have to spend a lot of money on our paint shop to upgrade it. We decided to spend £100,000 on building a new paint shop on space created by knocking down some older buildings. This freed a complete building.” 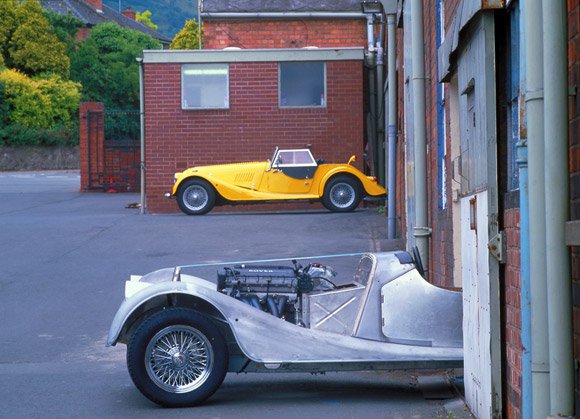 Compulsory purchase of land surrounding the factory by the Royal Signals Radar Establishment in the 1940s had left no room for expansion. Now, clearing one workshop and freeing space in others created the floor space needed to produce extra cars, and allowed work flow to be rationalised. “The process we use for making the cars is exactly the same as we’ve always used; we’ve just changed the order we do it in.” Each car is built to a specification defined by the customer around one of three basic model types. It starts in the chassis shop where the engine (from Ford or Rover), gearbox and back axle are fitted to a chassis from Hay on Wye-based ABT. The rolling chassis then travels through the factory – first to the body fitting department next door, where the ash body frames and steel or aluminium panels, manufactured on site, are fitted. Later stages include painting, fitting instruments and assemblies, finishing and trimming.

The popular notion that the cars never change is false. For example, air bags are now fitted on some cars. “Not as standard; it’s a very expensive option, developed for our America dealers and tested to full Federal standards. We still manage to make wish changes – things that we think we can make better – but these days it’s driven mainly by legislation. European requirements for emissions, noise, radio suppression and so on, are continuously changing. It’s a moving target, and a single change of phrase from first to final draft of a piece of legislation can change the whole emphasis. The beauty of our operation is that we are very responsive.”

The machine shop changes aim to reinforce this philosophy. “We’d been running with the same machine shop since the Second World War, using Ward lathes on the more complicated jobs, which have been fine. We looked at CNC some years ago, but at the time the flexibility was limited and it didn’t really fit. We’re doing relatively small batches; a run of 500 parts is a year’s worth.”

Morgan shelved the idea and revamped the Wards, but since 1992 legislation has driven up the volume of components needed. The time came when the Wards were working flat out on parts for production and a spares demand rising by 10 to 15% a year. “We were running them forty weeks in the year just on hub production.” A minor breakdown could mean several weeks delay waiting for components for these old machines.

Subcontracting was considered, but Morgan prefers to keep in-house work on brackets, fittings, hubs, suspension components, brake drums etc. It seemed logical to invest in machinery to the level used by the best subcontractors. Enter the machine tools: a Haas VF-0E vertical machining centre with HRT 210 rotary table, and a Haas HL-4 turning centre, supported by a Licom Advanced Mill “One Post” CAM system. Why Haas? “The overall package won it,” says Aston – not least the enthusiasm of Haas understanding the needs of people with no CNC experience. “This was completely new to us; so we needed a total package starting from scratch, including programming, operation, setting up, tooling. We literally gave a pile of bits and some drawings to Haas and said – these are what we want to make.”

Flexibility was also critical, plus capacity, within a realistic cost band. “We don’t borrow money to buy machinery – we’ll only buy what we can afford.” £120-130K is high for Morgan. “But we’d rather have the right machine than the cheapest machine. Initially, we were just talking about a milling machine; the lathe came in halfway through the process when we thought that if were going to reorganise the machine shop, we might as well do it once rather than twice.” In fact, Haas had to respond to a late size change – to a larger lathe – requested by Morgan to meet foreseeable future demand.

Currently the machines are occupied partly on production work, partly on development – for example, examining their potential in conjunction with the offerings of tooling suppliers. With some production jobs established, Morgan is looking at how best to use spare capacity; and time freed up on the older machines in allowing subcontracted work to come back in-house.

Components on the Haas machines include caliper mounting brackets, stub axles, engine plates, steering column brackets and brake drums. All operations on the caliper brackets (20 a week) are completed on the machining centre. Two castings are loaded at a time on a dual Chick fixture for first (face, drill, tap) and second (bore, face) op sequences respectively. A component comes off after each six-minute cycle, and is replaced by a new casting; the other is turned over so that it in turn can undergo the second op sequence – and so on. Previously, the sequence used a series of machines – with a net output of two per hour. Engine plates simply require a series of drilled holes, bores and taps, but each one used to take about two hours; now it’s 15 minutes.

On the lathe, front hubs now take 18 minutes for a two stage process (rechucking to get at each end of the component) which includes drilling, boring, turning inside and outside diameters and threading. Previously, one operation alone could take around 25 minutes. Brake drums – for which roundness is especially critical as these have to be fitted to the hubs – are also done in two stages: face, rough bore, chamfer and turn OD features; face inside, turn ID. Total cycle time is 16 minutes. This may not be rocket science, but the machine shop team is gradually learning to exploit the full potential of its equipment – a claim not every company buying new machine tools can make. Simplicity usually pays off, and Morgan has simply bought in the technology to match its needs – and in turn, those of its customers.

If you order a Morgan today you’ll have to wait five years (a “basic” 4/4 model costs around £20k, which seems very reasonable, and maintains the premise of a realistically priced product, on which HFS established the business). With the improvements in production equipment and workflow the waiting list may come down – but it will never be eliminated, because it’s part of the fun; part of a whole ethos based on “producing a car in traditional coach-built fashion with a separate rolling chassis and a wooden body frame; hand paneled, hand-painted. We are building cars as Rolls and Bentley – and even Ford and Austin – did in the early days.”

A productivity revolution would be inappropriate here – stability, continuity and evolution are the cornerstones. But by talking to customers and dealers – Morgan Motor Company probably wouldn’t describe this as market research – the company has established that there’s sustainable demand to justify an increase in production to 600 cars a year – which is, after all, as Aston points out, a 20% increase – dramatic by any standards.