If you want to travel cross-country, you buy a Land Rover: The choice of royalty and the British armed forces for generations. If you want to travel cross-country at very high speed, you buy a Land Rover-based Bowler Wildcat: Not as practical as the standard Land Rover – there’s not enough room for a brace of pheasants, let alone a pair of gun dogs – but it’ll get you across any terrain quicker than almost anything else on four wheels. The only thing is, the Bowler Wildcat costs £50,000 ($100,000) which, unless you’re planning to enter the Paris-Dakar, is a lot of money for a weekend toy.

For about one-third the cost of a Bowler, a small but expanding engineering business called Rage Motorsport in Dunstable, UK, will sell you an off-road buggy powered by a six-speed 180-hp Honda Fireblade motorcycle engine, with a top speed of over 100 mph. It may not be ready to tackle desert endurance races like the Bowler, but it can still make you feel like someone has put the universe on fast-forward.

Rage Motorsport builds multi-terrain, extreme performance vehicles that make even average drivers – with bigger than average adrenal glands – feel like driving gods. They’re exhilarating, hilariously fast and beautifully engineered. The Land Rover-based Bowler does 0-60 in 4.8 seconds: Quick on the tarmac, let alone ploughing through sand dunes. The top-of-the-range Rage weighs just 375 kg and does 0-60 in just 3 seconds, and it’s equally at home on the racetrack as it is off road. It’s no wonder the orders are stacking up. To meet demand, the company’s manufacturing operations are undergoing a major overhaul.

“Up until recently, we’d been subcontracting all of the major machined parts,” says Sales Director Joe Adams, “but we got to the point where we had to take stock of the situation and decide what our business objectives were. If we were going to grow the product range and the company, we realised we’d have to take responsibility for all the quality-critical operations. We couldn’t depend on suppliers any longer.” Twins Steve and Adam Gentil, who’d been making high-performance buggies for their own entertainment for around 15 years, started Rage just 4 years ago.

“Someone saw that they were making a world-class product and suggested that they put them into production,” says Adams. “Neither of them had any professional engineering training, but they taught themselves how to design a balanced, finely tuned chassis and marry it to a high-powered motorcycle engine. It sounds easy, but building something safe, fast and very driveable is no mean feat. Some big automotive companies spend tens of millions to achieve the same thing.”

Before investing in a Haas TL-25 CNC lathe with sub-spindle, and a Haas VF-2 CNC vertical machining centre, Rage took a careful look at what else was available.

“We looked at machine tool models that were cheaper, and some that were more expensive than the Haas machines, but we quickly concluded that we couldn’t do any better than the cost/specification of the U.S.-built machines,” explains the company’s co-founder and director, Steve Gentil. “Also, others had recommended Haas to us – and told us that after-sales service was second-to-none.”

Installed in June 2006, the two machines have been set to work producing a wide range of parts for the company’s increasingly popular and growing range of buggies. Parts machined include front and rear hubs, uprights, discs, ball joints and exhaust flanges, to name but a few. “The exhaust flanges are quite tricky to machine,” says Gentil. “They’re round on one side and oval on the other. But complex components are simple to produce using the Haas machines, even for relative novices.

“These are our first CNC machines; but to be honest, we needn’t have worried about getting to grips with them. We taught ourselves to program very quickly, and we were making parts a day or so after they were installed. “Operating the machines is like driving a Rage off-road racing buggy,” laughs Gentil. “They go wherever you point them, they’re responsive and they won’t let you down.”

Rage machines parts from aluminium, as well as mild, stainless and chromium steels. Some, such as bearing sets, are machined to particularly tight tolerances, which, according to Steve, the Haas machines are more than capable of achieving. 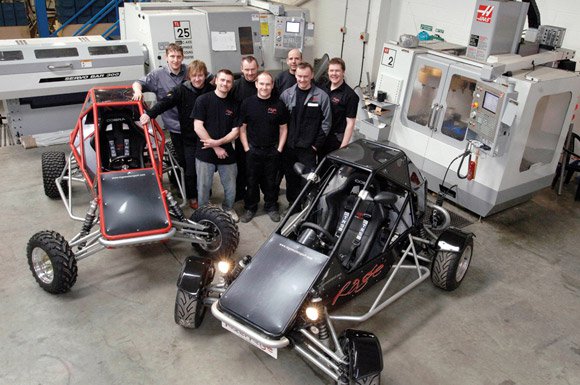 “We work the machines really hard,” he says. “They’re currently running 24 hours a day to keep up with demand, but we’ve had few, if any, problems. They’ve given us the quality and reliability we needed, so I’m pretty sure we’re going to be investing in more in the very near future.”

Around 10 Rage buggies are built at a time, so batch sizes vary from 100-off up to 1600-off for items such as small wishbone tubes.

“Installing our own in-house CNC machining facility has brought financial benefit, too,” concludes Steve. “Not only have we gained greater control of our production schedules, enabling us to be more productive, but we’ve also cut our piece-part costs in half!” Rage buggies have already become must-have weekend toys for hundreds of enthusiasts, who typically claim that it’s the most fun you can have on four wheels. They’re also fast becoming the industry standard corporate-entertainment vehicle, not just for their high fun quotient, but also because of their inherent reliability.

“More and more hospitality companies are choosing Rage buggies because they’re a safe investment,” says Adams. “They’re rugged, with very high standards of build quality and engineering. The frames are laser-cut, powder-coated tubular space frames; they have cross-drilled stainless discs all round, with two-pot Brembo calipers; and we only use the best fittings, such as Cobra FIA-approved race seats.” There’s a road going version – the Road Rage! – currently in testing, and there’s even talk of a race series or two.

“The eventual aim is to have official approval from the racing authorities, so we can set up a UK, and eventually a world-based, series,” says Adams, “perhaps with a purpose-built Rally-Cross version.”

For the time being, though, as word spreads, Rage Motorsport is enjoying a ride almost as exciting as the one it sells. If you want the fun of a Bowler Wildcat, but prefer not to spend your child’s college fund on a two-seater 4×4, Joe Adams will be happy to take your call.