“American Chopper,” the unlikely little television reality series focused on the daily doings at a father-and-sons custom motorcycle shop, has grown into a full-fledged global phenomenon. Contrary to the series’ notional name, the sign on the famous building in rural upstate New York reads: “OCC – Orange County Choppers.” Over the seasons, we’ve watched the size of this shop, the skill of the builders and the sophistication of the dazzling bikes all grow before our eyes. Yet, all we’ve seen so far is just the tip of this venturesome iceberg.

“You’re wasting time!” booms Senior, flying out of his office in a clinched-fist fury. Out on the floor, the prodigal sons respond true to form: Paulie digs in for a fight, while Mikey backs off with a smirk. The Orange County Choppers shop is, once again, a certifiable war zone. “It ain’t what you do,” bellows Senior’s almighty voice of clout, “it’s the way that you do it!”

We’ve seen it all before, but we can’t help smiling again. Paul Teutul Senior is seldom, if ever, subtle. But often enough, he’s dead right. On camera, American Chopper’s explosive paternal biker comes across as a bona fide brick – hardnosed, sharp-edged and basically unbreakable. Yet, amid the sound and fury of his carefully refined bad attitude, Senior occasionally treads dangerously close to being amicable – if not out-and-out charming.

And that may be the show’s unintentional (and priceless) secret. Viewers find the volatile interplay between Senior’s old-school work ethic and the sons’ laid-back creative approach more than just riveting; each week, millions find themselves effectively welded to their televisions. 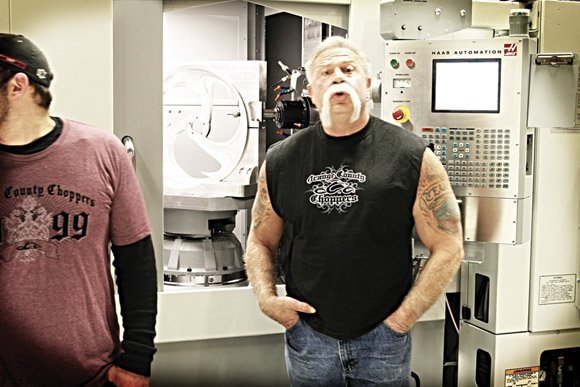 The inspired mix of long imagination and short temper strikes a chord with people the world over. The audience is “let in” on the design decisions, the mistakes and the failures that shape the perilous life-arc of each evolving project. Personalities flare, tools fly and time evaporates. Yet, somehow, against all odds, they always pull it off.

Once the strain and shouting die down, strong-willed Senior and gifted-son Paulie pretty much always see eye to eye. Concealed under the commotion, is a grudging yet genuine respect for each other’s talents. It’s all part of the OCC chemistry that makes the father, the sons and the celebrated cycles considerably larger than life.

But even global celebrities can’t escape reality. This is especially true in the area of daily manufacturing production. And that area is the new, unseen mass below the waterline at ever-growing OCC.

Looking beyond the present to a time when they leave television and become a part of American pop culture, the “new renaissance men” of motorcycles are laying the groundwork to make OCC the best-known and most influential bike builder in the world.

Senior’s behind-the-scenes business planners, designers, machinists and builders are settling in to manufacture a new line of standardized production bikes to support a growing chain of OCC retail dealers. Until now, each bike has been specifically made to order for each customer, so this represents a major shift in the way everyone at OCC must approach their work. But no one faces greater changes than OCC’s machine-shop manager Jim Quinn. 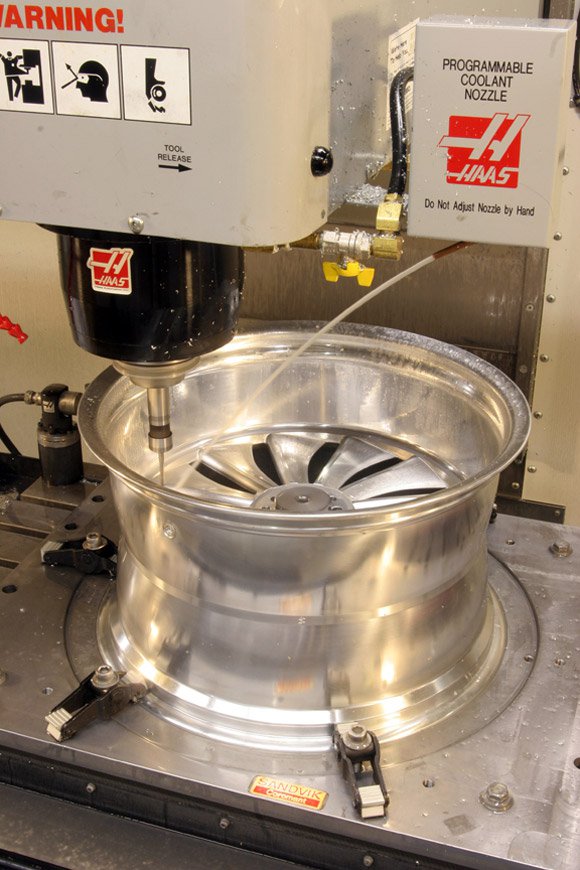 “It’s definitely a challenge,” says Quinn. “In some ways it’s easier, but in many ways it’s more difficult. Because of the way we‘ve networked our machines, once we’ve made a part to spec, it’s just a matter of loading the program and we can duplicate it again without any problems.”

But trying to dedicate machines to manufacturing production, while building one-off bikes under the pressures of television production, is no cakewalk. “That’s the other part of it,” smiles Quinn. “It never fails. As soon as I get a machine set up to run production wheels all day, it’s ‘Oops!’ we’ve got to break in and run a special design for one of the bikes for the show.”

Realizing they suddenly had a lot more irons in the fire, the OCC gang set out last year to virtually double the size of their machine shop. Senior and Mikey, with a full video crew in tow, dropped in on the one-million-square-foot Haas Automation factory in Southern California, and humorously scribed their names on the machines they wanted. Jim Quinn and many others had thoughtfully coordinated the expansion and suggested which machines to acquire weeks before the stars left for the sunny coast; but Senior’s impromptu “This one’s mine!” scrawl, staged during the factory tour, was much more entertaining on camera.

Back home, the OCC machine shop began expanding, spilling over into what had been the warehousing area of the 30,000-square-foot building. This new annex holds a recently installed Haas Mini Mill, TL-1 Toolroom Lathe and EC-500 horizontal machining center – all tied in with the crew’s ever-busy VF-5/50, VM-3 and VF-2SS vertical machining centers, and SL-20 lathe.

“The nice part is that I now have crossover between all my Haas machines,” says Quinn. “Pretty much the same program will work on any of them. And, I keep my tool libraries the same from machine to machine: Tool two is always a drill; tool seven is always a quarter-inch endmill and so on. With this broad interchangeability, it’s amazing what we can do.

“There was a day here, a couple months ago, when I had wheels running on four of my five mills, even the VF-2,” says Quinn. “A lot of Senior’s old-school bikes take a 16-inch rear wheel, instead of the usual 18s and 21s we put on most of our choppers. I said, ‘You know what? . . . I think this will fit in here!’ I’d never even thought of cutting wheels on the VF-2 before, but I needed four sets going out that day. Happily, the 16-incher fit the VF-2’s cutting envelope with a bit to spare, and I didn’t have to change a thing in the program. To be able to just throw it in and cut wheels on all those machines, all at the same time, was just amazing.”

Every Haas machine at OCC is fully networked, and has either a 20- or 40-gigabite hard drive, which Quinn accesses from his office. “I use my desktop to post the programs through Mastercam®,” he says. “I output that post, and send the NC code directly to the machine tool.”

The flawless finishes Quinn achieves on OCC’s famous appearance parts are the result of both his machining street smarts and the flexibility of this network setup. “The chaining tolerances I use in Mastercam are always evolving,” he admits, “I’m now down to about five millionths. This makes the programs extremely large, but you couldn’t ask for a finer finish. Since the programs are too big for resident memory, I do most of my wheel and surfacing files through DNC,” he explains. “Our chromers and polishers really love the finish we’re getting off the Haas machines.” 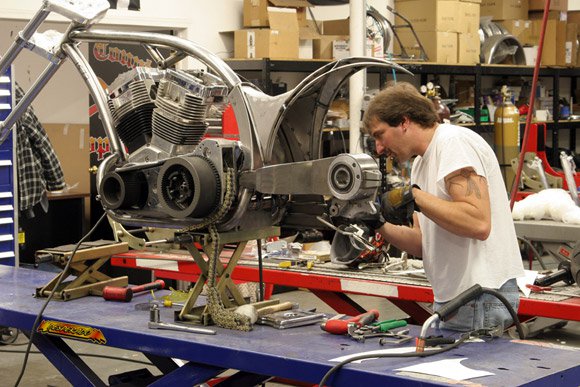 With the challenging expansion into production manufacturing alongside the custom-build television demands, nearly everyone in the OCC shop, including Quinn, is wearing a lot more hats these days: machinist, designer, fabricator, engineer, assembler and, of course, TV personality. Everyone has to be a little bit of everything – the classic definition of “Renaissance Men.”

“Yeah, that’s kind of what we’ve become,” confides Quinn. “But this way, everybody knows the product a lot better than when we were niched, always doing the same job.” The change was absolutely necessary, he explains, to get OCC to where it is today. “When you consider some of the tight time frames we face, it’s obvious we can’t afford a machinist-versus-designer standoff around here,” says Quinn. “Everybody has to work together to put out bikes; our systems have to be efficient.” The crew has to give Paulie what he needs, when he needs it, and Senior what he wants, when he wants it!

Left unsaid is the fact that they must now also face the dogged demands of daily production.

After peering below the surface of OCC, it’s easier to value Senior’s hard-nosed work ethic, and to appreciate why nothing sets him off like “wasted time!” But, above everything else, this is a shop of talented, creative people influenced by the imaginative minds of Paulie and Mikey Teutul. If there’s any leftover time available, real renaissance men will find a way to fill it . . . with creative mischief.

So, when Senior has lobsters delivered, packed in dry ice, it’s only a matter of time before a tightly sealed bottle of dry ice chips and water is tossed out onto the floor, just outside his office. When the bottle reaches maximum pressure and explodes, so does Senior. The famous black door flies open with a vengeance and, once again, the prolific OCC shop becomes a video war zone.

Millions of smiling viewers the world over wouldn’t have it any other way.