Catering to the Cream of the Custom Car Crop

High-tech design, artistic quality and elegant exclusivity: a virtual triad of features that demand respect and get big bucks. Sure, you can get by with cheap imitations that get the job done, but in the rarefied world where cost is no object, there truly is nothing like the best.

In a world filled with BMWs, Corvettes and Porsches, it’s no surprise that an elite group of manufacturers prosper simply by catering to the select cravings of this niche group. One such manufacturer is HRE Performance Wheels of Vista, California. HRE produces three-piece wheels with forged centers that are custom-built to their clients’ specifications. 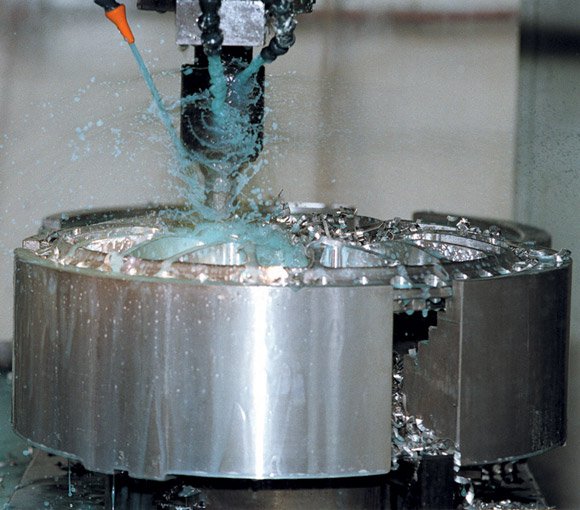 “We only work in forged aluminum, and we have a growing number of styles machined from our two standard forgings,” says Philip M. Hillhouse, HRE’s head of marketing. “They are precision milled on Haas machining centers, allowing us not only to have a very strong wheel, but a very lightweight wheel as well.

“One of the nice qualities of a three-piece wheel is that any one of our styles can be assembled to fit basically an unlimited number of cars,” says Philip. “And we’re not just talking bolt patterns here. Proper fitment includes offsets, rim widths, and adaptability that will keep the tire from shredding itself on the fender well or suspension parts while the car is being driven.” Wheel photo courtesy HRE

“We found that we could machine wheels that were stronger and more stylish by using forgings over castings,” Philip continues. “With designs cut on CNCs using software-controlled programs, these forged, individualized designs command higher prices, yet deliver wheels that not only look good, but are also of the highest technical quality. They’re race-quality wheels with market-driven designs.

“For instance, if you look at one of our styles, like the ‘540,’ we have four programs that deal specifically with size, ranging from the 17-inch through the 20-inch diameter. Then we have sub-programs that put in the different bolt patterns,” explains Philip. “It all comes out of the same forging, so it’s only a question of which program you load into the mill.”

The raw forging itself weighs 57 pounds right out of the box. However, when HRE is done with the CNC machining, one of the heavier centers, such as the ‘545’ five-spoke, ends up weighing in at only 10 pounds, leaving about 47 pounds of swarf heading back to the recycler.

Why Did You Buy Haas?

One of the major reasons HRE selected Haas machines was to solve production problems. Unlike the mass- market manufacturers that run wheels in five-figure numbers, HRE provides its customers with limited-run, personalized wheels. Designs may be restricted to as few as ten sets for those select few willing to pay the price for personal perfection.

“There were many different machines we could have gone with, but Haas has a good reputation, and frankly, the Haas gives us the flexibility to run various designs through it,” says Philip. “The fact that Haas machines are locally manufactured was an additional benefit.”

“As far as horsepower is concerned, the Haas pushes the drills,” says Daniel Hinkel, production. “Our lug-hole drill is a step drill. It goes from 0.625″ up to almost an inch and a quarter, and the Haas pushes it through pretty good. We had a machine from Korea that didn’t perform to our expectations. It would drill about halfway through and then stall the spindle.

“The ample horsepower and torque of the Haas has actually decreased our cycle times, because we can hog out a lot more aluminum, and there’s more speed and feed,” he continues. “We’ve got a lot of hogging to do to clean out the windows in the wheel center patterns, so the Haas has really helped us out.

“And frankly, one of the reasons we’re staying with Haas is that once you’ve trained your workers on one, they can operate any Haas. We’ve got two Haas VMCs now, and we’ll probably be adding a third soon. If a worker knows how to work one machine, he’ll know how to work all three. And if you have a job go down on one, it can easily be moved to another machine.”

The Haas control has definitely helped HRE when it comes to using sub-programs. “With our old mills,” continues Daniel, “there were a lot more steps involved as far as setup programs were concerned. Now I can just throw a sub-program in and flip a wheel over and do the hub bore. On the ‘545’ style, we tap the back side, which used to require loading a separate program. Now we just use a sub-program and machine two centers per setup – one front, one back – combining them both on one program.

“We’ve also started working a lot of the lug patterns at the same time we cut the windows. Since we put all of our assembly holes and lug patterns on the same program, it saves time by eliminating a lot of extra setup.”

“The Haas control gave us more flexibility when trying out new styles,” says Doug Chudomelka, production manager. “It’s a lot more user-friendly than our old Japanese machine for doing setup changes and program alterations, plus it’s real easy to learn. A lot of guys who come in haven’t run a Haas before, but they catch right on to the simplicity of the Haas control.

“One of the features we recently have started using more is the engraving function. A lot of countries in Europe now require serial numbers as part of their anti-theft programs. We used to do this by hand, but it is much easier, quicker and more professional looking to use the sub-program to do this step on the Haas.”

“Because we can easily reprogram our setups, we can service a growing new customer segment that is highly specialized, yet very noticeable: the ‘custom tuner’ market. These are what we refer to as our ‘Private Label’ customers,” explains Philip, “the custom outfitters who purchase stock vehicles, then modify them to meet the needs of customers who can afford such special touches. Modifications can include simple bodywork, or involve major redesigns of the suspension and engine for enhanced performance. In a sense, these are custom-fitted, re-badged, brand new cars.”

One of the easiest ways to make a car look substantially different from stock is to bolt on custom wheels. And since HRE can provide a design that’s unique to a particular ‘custom tuner,’ that tuner can have a singular design that is not available elsewhere on the market. Since it’s just an exercise in modifying the part program for HRE, it’s relatively inexpensive to provide these outfitters with a short-run custom wheel of their own dedicated design.

“These are usually based on pretty basic designs,” says Philip, “But since they are available in a three-piece format, it gives us the ultimate versatility to provide a perfect fit for any fender well, modified or stock. And because of the added strength found with the forging process, we can be more creative in our designs, while maintaining the structural foundation necessary in a wheel of this type.”

“Cutting our window patterns [the see-through areas between the wheel spokes] is probably our longest cycle,” says Daniel. “Our shortest run time is on a flat-style five-spoke wheel, which has a 15-minute cycle time to hog out the windows. When you get into the more complex designs with a mesh of criss-crossing spokes, such as the flagship ‘540,’ you are looking at 45 minutes per wheel to cut all of those openings.

“But as far as having enough horsepower and torque to give us clean cuts at a good feed, the Haas VMCs have been great,” says Daniel. “We haven’t had any problems at all, especially for as hard as we cut them. I run a spindle load of probably 80-90% almost all day long, and they’ve held up fine,” he continues. “I’ve never had a problem with it stalling out or anything like that.”

While HRE does build limited quantities of wheels, they refuse to be limited to one vehicle market. “We’re going to expand our work into the upscale SUV (sport utility vehicle) market,” says Philip. “The same customer who is buying our wheels for their expensive car is also going to buy wheels for his expensive SUV.”

But the ability to cut incredible looking designs out of forgings is somewhat time consuming. “It is strictly for a high-end market,” says Philip. “But the look you get is unique, and it gives you a niche in the market that no one else has filled. You might say we’re creating wheels now that people don’t even know they need. Since we’re custom, we basically react to the needs of the customer – the specific needs and diameters of the vehicle the customer is driving – and then we go out in the shop and build it.”