In what looks like a cowshed at the end of a farm track somewhere near Oxford, UK, sits a million – perhaps two million – Euros worth of semi-assembled automobile nostalgia. The vehicles are owned by people as far away as New York City and Monaco, who made their fortunes on stock markets, or maybe selling mobile phones. These people have decided, perhaps against their own better judgement, to liberate a few tens – or hundreds – of thousand Euros from the claws of their over-remunerated hedge-fund managers to restore and preserve parts of Britain’s proud motoring heritage: pre-war Rolls-Royce and Bentley motorcars. As an unintended consequence, romantic saps like me can stand agog on a snowy February morning and admire the craftsmanship of the obsessive Will Fiennes, and the genial and similarly obsessed band of fettlers, panel beaters and mechanics who make up his company, Fiennes Restorations Ltd.

It’s easy to outstay your welcome at a company like Fiennes, and I fear that on the morning in question, I may well have. Workshops like this have a magical quality about them. And the hospitable people who inhabit them, endowed with so much enthusiasm for what they do, will, without too much encouragement, talk far longer then they probably should, given that this is a going concern with demanding customers, rather than just a hobby that pays. Even if it started as such. 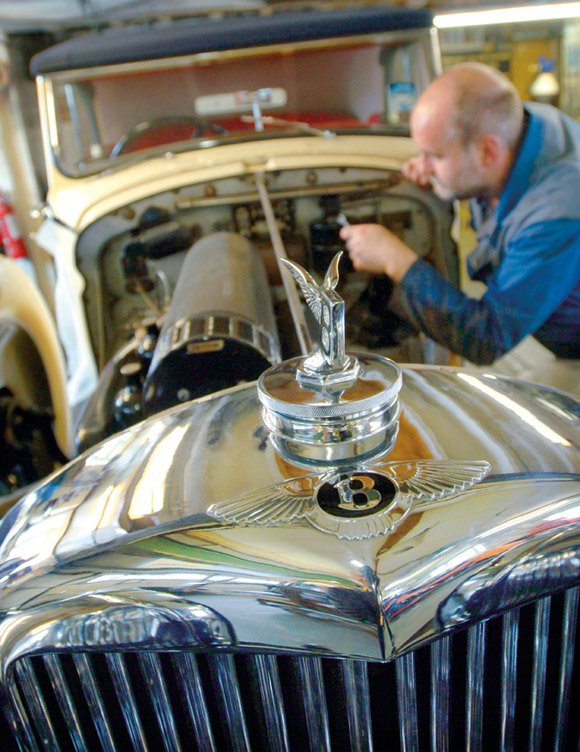 “I drove a pre-war Riley while I was studying at Oxford,” recounts Will Fiennes, “so I spent a lot of time working on my own car and helping friends with theirs. After I finished my Ph.D., I worked at Smiths (Aerospace) Industries for a while, until I realised that industrial research wasn’t really for me, and so decided to do my own thing.”

Like most labour-of-love businesses, the first incarnation of Fiennes Restoration began as a one-man band, but soon had need for an extra pair of hands.

“Things started well, so I went looking for a panel beater,” Fiennes explains. “I found the man, but not long after he joined me, he had a massive heart attack. Fortunately, not bad enough to kill him, but bad enough that he never came back to work again. I was left facing a mountain of orders, which I just couldn’t meet, so I wound-up the business and started again as a sole trader.”

That was 1976. Five years later, and the company relocated to the present day “cowshed” in Little Clanfield, subsequently merged with or acquired similar, complementary businesses, and has since grown to become a complex of cowsheds housing three core activities: the restoration business, Fiennes Engineering and Fiennes Coachbuilding. Another 25 years have passed, and the company is world renowned as a specialist vehicle restorer, and manufacturer of spare parts for the small-horsepower models of early Rolls-Royces and Bentleys.

“We do everything from ground-up restorations to general maintenance and spare parts reengineering and manufacturing,” says Fiennes. “In fact, we have something like 4000 parts listed on the website, and another 3000 or so that we can make as and when we need to.”

The company has been supplying one of its customers with reengineered aluminium cylinder heads for 18 years.

“This particular chap originally owned a 20 hp Rolls- Royce, which needed a new head,” says Fiennes. “He figured that if he was going to the considerable trouble and expense of reengineering a new one, he might as well make several and sell them to other owners. The standard Rolls-Royce head had inherent weaknesses, so the demand was there.”

Rolls would have originally made the parts as iron castings – with, according to Fiennes, a scrap rate during manufacturing of more than 60%! The remanufactured heads are made in aluminium alloy, with an almost zero scrap rate.

“We were fortunate to come by the original drawings of the part, saved and preserved by the Rolls-Royce Enthusiast Club when the service depot on Hythe Road, London, closed down about 20 years ago,” Fiennes recounts.

An eagle-eyed enthusiast spotted the drawings, alerted the RREC and made sure they were salvaged before the building was destroyed. It made the job of reengineering that part considerably easier, and allowed Fiennes to eliminate the problems that dogged the original part.

“Currently, we make five different types of head, around 60 of each type every year,” he says. “They’re shipped all over the world.”

Like all manufacturing businesses, Fiennes Restoration lives and dies by the quality of its decisions, not just the quality of its products, which is why, when it came to choosing its CNC machine tools, it considered its options very carefully, indeed.

“Up until 2002, we’d been machining the cylinder heads with a basic CNC turret mill without a toolchanger,” says Fiennes. “It had done the job well enough, but we desperately needed something more efficient, so we took a day trip to MACH 2002, with the express intention of looking for a new mill.”

Fiennes had already decided against a horizontal machine because of the typically high purchase price. So, although he had a clear idea of what he didn’t want, he wasn’t exactly sure of what he was looking for. “I remember being very impressed with the machines on the Haas stand,” he says, “and not being particularly taken with the large number of clones imported from the Far East.

“We knew that if we were going to buy a vertical machine, we’d need something with good Z-axis clearance,” explains Fiennes. “The Haas VF-4 seemed like an excellent and good-sized machine for the money. What sealed the deal was the fact that Haas also makes its own 4th-axis rotary tables, so we felt confident that the two would work together without any problems.” The machine was delivered and installed at the end of 2002, and began work almost immediately, machining the cylinder heads.

The first stage of the machining process finishes the combustion face, which becomes the reference surface when the head is subsequently mounted onto the Haas HRT-210 rotary table.

“The Haas 4th axis allows us to access all of the faces except the two ends,” says Fiennes. “We use the old turret mill to do this final operation, although we haven’t discounted the possibility of eventually buying a right-angled head to fit on the Haas, so we can do the whole thing in one setup.”

Total machining time for a head on the VF-4 is around 6 1/2 hours, with the machine active almost nonstop for 5 day-shifts a week.

“We use a subcontractor to fit the cylinder head valve seats,” says Fiennes, “but I’m confident that we can eventually use the accuracy of the Haas VF-4 to do the job during the main setup, meaning we can keep more of the job in-house, giving us greater control of the quality and delivery.”

Two Machines, One Control, One Man

Sitting opposite the Haas VF-4 is the company’s latest acquisition: a Haas CNC Mini Mill, also equipped with a Haas 4th-axis rotary table. Darting between the two is CNC operator Paul Russell, another relatively new arrival at the company.

On the day of my visit, the Haas Mini Mill was being used to machine a pipe outlet for a thermostat unit. The machine’s versatility and easy operation mean that jobs can be set up in no time at all, making it a valuable tool for a company with so many different spare parts on its price list.

“Both of the Haas machines are incredibly easy to use and to program,” notes Russell. “I had no experience of programming a Haas before I came to work at Fiennes, but I did know Fanuc controls. The Haas control is similar, but is also very user-friendly and quick to learn.”

Fiennes Restoration Ltd. has restored or worked on a wide range of pre-war Rolls-Royces, including Phantoms, Silver Ghosts and Wraiths, and a variety of Bentley 3 1/2Ls and 4 1/4Ls bodied by different coachbuilders, and built during the period 1907 to 1940.

The company is perhaps best known for its expertise with the small-horsepower Rolls-Royces, such as the lightweight and fine-handling 20hp and the more powerful 20/25hp – popular six-cylinder cars produced in large numbers during the inter-wars period.

The 25hp model not only delivered more power than its shorter-wheelbase little sister, but also better acceleration and improved fuel consumption, which gave coachbuilders the opportunity to design larger, limousine-style bodies.

Almost 4000 20/25s were built between 1929 and 1936, and Fiennes Restorations either stocks or can make a huge number of parts for the vehicle – perhaps more than it does for any other model of either Bentley or Rolls-Royce.

We use the Haas Mini Mill for all of those jobs we’d like to run on the VF-4, but really are too small to justify tying up the bigger machine.