Back in the good old days, before the advent of skateboards and in-line skates, a kid needed a little ingenuity when it came to developing modes of transportation. Sure there were bicycles, but they were for big kids, and you had to convince the elders you were deserving of such a purchase. And what if you were in that awkward in-between stage: too big for a tricycle, but too small for a bicycle? There just weren’t many options.

Until the discovery of the handy-dandy, home-built scooter. You found yourself an old orange crate and some scrap wood, appropriated an old pair of metal roller skates, borrowed your dad’s hammer and a selection of nails and assembled everything into the coolest vehicle in the neighborhood. Well, it seemed pretty cool at the time, and it let you rip up the sidewalks with abandon until you were big enough to justify that Schwinn Stingray with the blue, metal-flake vinyl banana seat.

Over the years, the orange-crate scooter evolved in a couple different directions. Southern California saw the birth of the sidewalk surfer, a variation of the board and roller skate combination, but sans handlebars. This was the precursor to the modern skateboard. 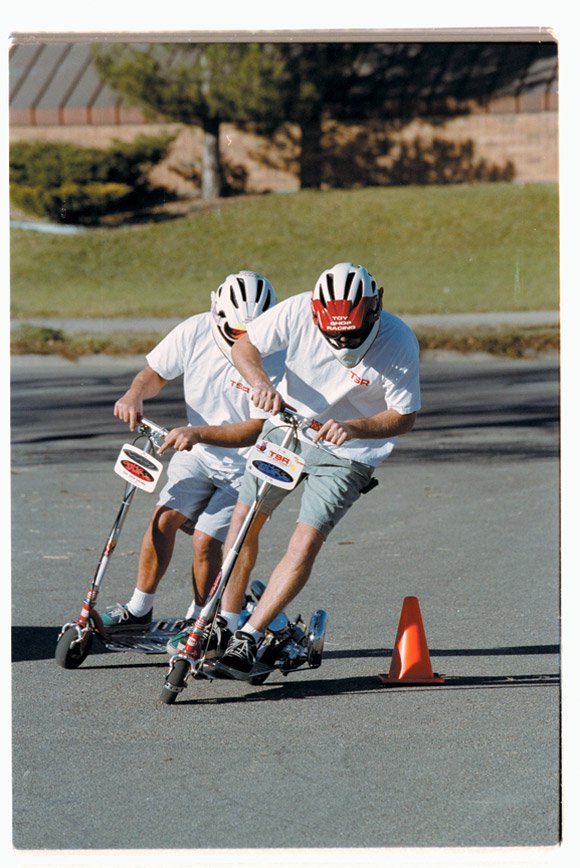 Another branch of the family tree yielded the metal scooter. Basically a mass- produced version of the old crate and roller skate contraption, these featured a single rubber tire fore and aft, a stamped-steel foot deck, chest-high handlebars (at least they were chest high if you were eight) and multi-colored streamers dangling from the hand grips. For the most part, these were merely stepping stones between three- and two-wheeled mobility, eventually handed down to younger siblings or banished to the garage to collect dust.

Until, that is, an over-zealous gearhead name of Steve Patmont strapped an old Weed Eater engine to his scooter’s rear wheel, thus creating the Go-Ped. A far cry from the self-propelled contraptions of yore, the Go-Ped is not just for kids anymore.

At first considered a novelty, Go-Peds soon developed a cult-like following. As with any vehicle, motorized or not, get a couple testosterone-addled owners together, and the next thing you know, there’s a race. And where there’s a race, there’s a loser. And where there’s a loser, there’s an overwhelming need to vanquish the loss by returning to beat the winner. Thus begins the endless cycle of spend money, modify, race, spend money, modify, race. The end result? A dual-overhead-cam, fuel-injected, 16-valve, twin-turbo, nitro-burning, 450-horsepower scooter that’ll do flamin’ burnouts two miles long at 150 miles per hour.

Well, maybe that’s a little extreme. But the reality is, people actually do race the darn things! Powered by a 22.5 cc two-stroke engine, a stock Go-Ped will reach top speeds of about 20 mph. In full-race trim, a Pro-Modified Go-Ped will crank out about 10 horsepower and hit speeds up to 35 mph. As with other racing, set-up is crucial, with different tracks requiring different set-ups. Short, technical tracks loaded with tight turns require a Ped that’s quick off the line and has lots of low-end grunt to squirt from apex to apex. A course heavy on straights, however, requires more top-end power and the speed to cover the most ground in the least amount of time. It’s a fine line to walk, and it’s always a compromise. Get the mix wrong and you’ll be left behind.

In the endless battle to come out on top, owners were quick to grab anything that would make their rides faster or better-looking. A tremendous demand soon developed for high-performance parts. And where there’s a demand, there’s an aftermarket.

Through a rather chance encounter, Triton Engineering & Manufacturing (see main story for more about Triton) stumbled into the Go-Ped culture. David Weaver, the number-two man at Triton, explains: “Two kids came through the shop and asked if we could make some parts for them. We said, ‘Sure,’ and it just went from there. All of a sudden, from those two kids alone, we got probably 100 sales. When we originally designed some of that stuff we thought, ‘Yeah, right, trick parts for Go-Peds.’ But since then, business has grown tremendously.”

Seeing an obviously untapped market for Go-Ped trickery, Triton stepped into the void and soon found themselves machining a myriad of parts. They are now the number one manufacturer of aftermarket Go-Ped products in the world. “We build billet wheels, billet foot decks, billet side covers for the engine, turbo cones, miniature forks, all kinds of weird stuff,” said Ron Gitlin, Triton’s president. “Pretty much anything you can replace on a Go-Ped, we make it; and we private label for several different companies.”

At the recent Go-Ped Nationals in Omaha, Nebraska, about 100 competitors gathered to battle for top honors in Pro, Amateur, Junior and Women’s divisions. Triton products adorned the rides of nearly every top competitor, including Denver’s Toy Shop Racing, which descended on the event with a collection of ten racing Peds fully decked out with Triton parts. Ray Kite, TSR’s owner, crew chief and engine builder, referred to his team as “the Indy crew of the Go-Ped world.”

From a piecemeal wooden contraption to a full-on racing machine. Talk about evolution.