If it has an engine, you can trick it out and make it faster.

Ron Gitlin has applied this theory most of his life: first to his race bikes, and later to personal watercraft, motocrossers, roadracers and Go-Peds. Fortunately, thousands of other speed-addled individuals share this penchant for hopping up whatever motorized machine they have at the time. Otherwise, Gitlin would still be hating life, chasing contracts in the endless dance of feast or famine that is the traditional job shop business.

Today, Gitlin is president of Triton Engineering & Manufacturing of Boulder, Colorado, a machine shop founded by his father in 1946. He took over the reins in 1989 when his father decided to retire … but he refused to dance the same old dance.

He wanted a steady dance partner for Triton – one that wouldn’t run off with another shop at the drop of a low bid. To temper the ups and downs of the business and add some stability, Gitlin decided to manufacture his own products.

Gitlin had the products: He had prototyped his first designs in the late 80s via UPS, penning the designs while working at a Florida motorcycle shop and sending them to his father for machining.

Upon taking the helm at Triton, he was able to implement these designs and jump-start production.

And he had the market: Extensive experience in the motorcycle and watercraft industries gave Gitlin an immediate inroad – he knew what to make, who to sell it to, and the weaknesses of the competition. He found distributors in short order.

Though they already had several older turning centers and machining centers, Triton needed another machining center to boost production, especially of their larger cylinder heads. They wanted a machine that was larger and faster and would allow them to set up multiple fixtures quickly and easily. After thorough research, they selected a VF-3 vertical machining center (40″ x 20″ x 25″ travels) from Haas Automation

According to David Weaver, Triton’s head machinist and second in command, many things contributed to their decision to buy the VF-3, including the big table, large Z travel, value, price and speed. But, “It was the control that really sold us,” he said.

Gitlin agreed. “We read about the Haas machines and they sounded good, but what really sold us was taking a test drive and finding out how good the control is. All my machines have Mitsubishi, Fanuc or Yasnac controls, with the exception of the Haas. As far as I’m concerned, the Haas is literally the best control on the market. It’s definitely the most sophisticated, and it’s the easiest to program.

“For instance, the way you can go into your canned cycles, like for pecking, and change the parameters so easily. You can make the mill rapid all the way down to within whatever tolerance you’re comfortable with and pick up where it left off, rather than returning to the zero point and slowly feeding down. That’s incredible, because on our cylinder heads, half the machine time is a drilling cycle. We were able to take parts and literally reduce the machine time by 40 percent. It was amazing.” 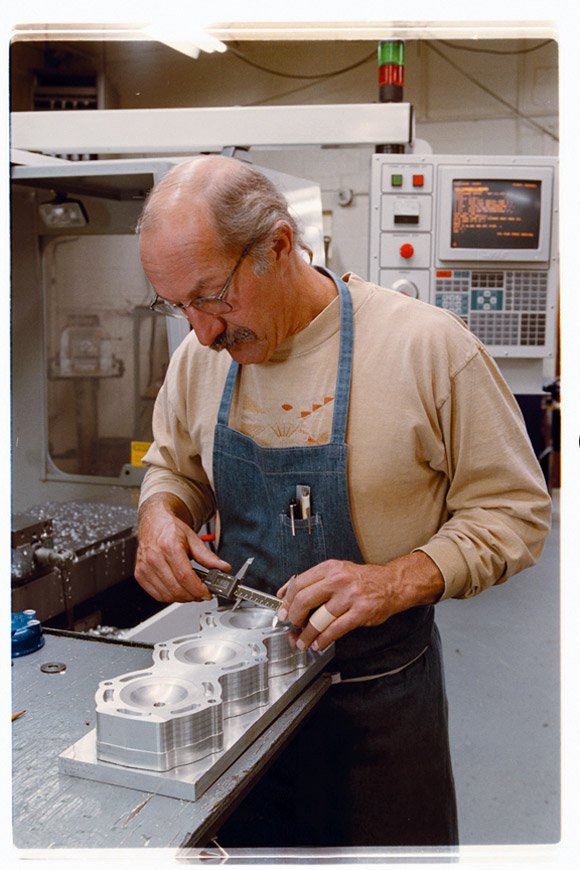 Typical batch sizes are 50 to 100 pieces, depending on the model, and Triton uses multiple fixtures to hold up to four heads at a time on the table. The Yamaha 1100 triple is a good example of a typical cylinder head operation on the VF-3.

The head starts as a 2″ x 6″ x 16″ block of 6061-T6 aluminum. The block is drilled for mounting holes, and the spark plug holes are drilled and tapped. The periphery is then roughed to within 0.025″ using a Helimill® (a high-speed, inserted endmill from Iscar) at 10,000 rpm and 130 inches per minute. Two clean-up passes take the part to its finished size, then the bottom of the head is machined and the combustion chambers cut. The head is then refixtured to finish the top.

Total time for all operations is about 1 hour, 15 minutes.

“I would say we probably took 10 to 12 minutes off the Yamaha triple with the Haas,” Weaver said. That’s a big savings on a run of 50 heads, and Triton has achieved similar results on their other products.

“We build these things called ski bridges,” Gitlin said, “a repetitive part. The fastest we were able to build that part on our other machines was a little over nine minutes. With the Haas, we got it down to a little over five minutes.” That’s a reduction in cycle time of nearly 45 percent.

Gitlin went on to say, “We were able to take a lot of our existing programs and speed up the processes tremendously. Via the 10,000-rpm spindle and the torque of the servo motors, we were able to run much heavier chip loads; and the size of the machine (48″ x 20″ table) enables us to run more vices and more parts at one time for faster turn-around times.

“If somebody wants billet side covers for a [Yamaha] YZF 600, we can run a hundred of them on the Haas and be out of there and onto another job faster than we can on any of our other machines.”

And, “The Haas produces a much nicer looking product,” Weaver added. “A lot of our products are aesthetic. It’s not so much a matter of function, but does it look cool? That’s what a lot of the Go-Ped kids and the Jet Ski world want: to look cool.”

In addition to reducing Triton’s cycle times, the Haas VF-3 has also been very reliable. “It hasn’t even hiccupped,” Gitlin said. “We literally have not had even a minute of down time.”

“I wish we had discovered Haas a lot sooner,” commented Weaver. “I’ve never seen a machine come into any shop, anywhere, that didn’t have some kind of problem right off the bat. The Haas is the only machine I’ve ever seen where it was, ‘Come in, drop it on the floor, turn it on and here you go.’ No problem.”

And it’s accurate. “We probably hold plus or minus two-tenths (0.0002″), although it’s not really required for most of what we’re doing,” Weaver said. “But occasionally I’ll get into a bearing surface and the Haas will hold a tenth all day. Whereas my other machines will take an hour or two to stabilize out, the Haas just seems to be close right from the beginning. And it doesn’t change.”

Gitlin agreed, “The Haas does not change at any point in time during the day, and it does not change regardless of how much down time there is between cycles. For instance, if we’re running parts all day and the operator takes a 20-minute break, the next part he makes after the break will be exactly the same size as the part before the break. That’s not true for our other machines; the part will change a few tenths.”

This accuracy, repeatability and reliability allow Triton to maintain the superior quality necessary to meet the demands of the high-performance motorsports industry. Their ability to produce quality products and quickly react to market fluctuations has provided the stability they need to dance the dance in today’s competitive marketplace.

The Haas produces a much nicer looking product.