Machining a Piece of History

Ask Olympic gold medalist Pierre Lueders about the runners on his two-man bobsled and he’ll probably change the subject. Ask his machine shop about his runners and you’ll get pretty much the same thing. This type of relationship is one of the reasons Lueders selected Specialty Tool and Manufacturing Co. (Stamco) of Edmonton, Alberta, to machine the runners for his gold medal-winning two-man bobsled.

For bobsled teams, the design of their runners and the material they’re made out of is a closely guarded secret. As one of the few areas where they can make slight modifications to gain the competitive edge, teams keep the details to themselves.

When Lueders needed to copy an existing runner design into a new material, he looked around for a competent shop that he could trust to do the job right – and keep the details quiet. As the only shop in Edmonton at that time with tracing capabilities, Stamco became the shop of choice.

It would seem that machining bobsled runners would be a little out of the ordinary for a shop of this sort. But, according to Alfred Ruefli, Stamco’s senior manufacturing engineer, that’s not the case.

“We have a lot of customers who come in and have special needs,” he said, “and we try to fulfill all their needs.” This type of custom work accounts for about fifty percent of Stamco’s business.

Stamco’s shop consists of about 30 machines, including four CNC milling centers and two CNC lathes. Among the CNC machines are an HL-4 lathe and two vertical machining centers (VF-2 and VF-4) from Haas Automation. 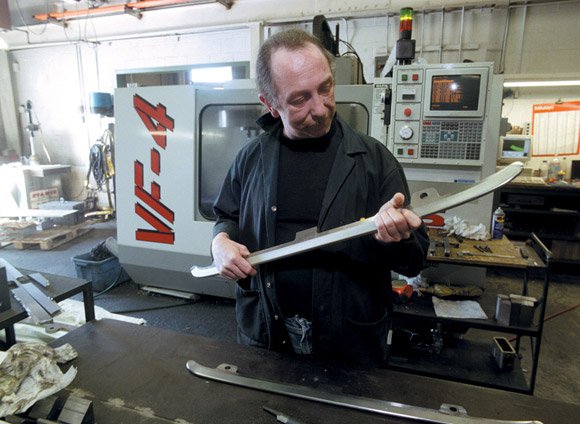 According to Ruefli, “A lot of work is actually for the molds. That’s the major area where we use all the CNC machines.”

Rob Edge, one of Stamco’s CNC programmers, agreed. “The majority of our work is plastic injection molds. We make them out of steel, like P20, and we also use 7075 aluminum. The majority of the stuff we do is very fancy shapes.” (Edge has since left Stamco and moved to Ontario.)

Which, according to Giuseppe (Joe) Franco, Stamco’s co-owner, is why they purchased their first Haas, the VF-2. “We needed to add a machining center with tracing capabilities and a 4th axis to do mold making and die making. At that time, the VF-2, for the cost, was the best choice for us. As a matter of fact,” he continued, “that’s where we did the first few sets of runners for Pierre.”

Cut out of steel plate, Stamco currently machines each side of the runners in one setup on their VF-4. Runners for the two-man sled are 36″ and 42″ long, and the four-man runners are 40″ and 48″ inches long. According to Ruefli, it takes about eight hours to machine one side of each runner. Then it is flipped over and the other side is machined.

Prior to their purchase of the VF-4 last year, Stamco previously machined Lueders’ runners on their smaller VF-2. Since the length of the runners exceeded the travels of the smaller machine, they had to shift the part in the fixture to machine the entire length. “Too many times we did not have long enough travel,” Franco explained, “so we bought a larger machine.”

To date, Stamco has machined seven sets of runners for Lueders, including the set he and brakeman Dave MacEachern rode to a gold medal at Nagano.

So, how does it feel to be a part of history?

Edge summed it up like this: “We were pretty proud. A lot of the stuff we do you never see or really hear about it. Pierre is one of the few customers we have that you can actually say, ‘Hey, I did that.’

“Yeah, we were all pretty proud, especially when he came in and showed us the medal – very impressive.”