KB Golf - The Mouse That Roared!

Titleist, Callaway, Dunlop, Cobra – if you don’t recognize these brands, you’re not a prospective customer of KB Golf. Tucked into a small industrial park in Sunnyvale, California, a 2,200-square-foot machine shop assaults the giants of the industry and mills its way into the hearts of golf aficionados worldwide!

Kevin Burns commenced designing and milling golf putters in 1993. With a four-year background in golf club repair, Kevin had the vision of his own product, his own company, his own profit. After five years of research and development, Kevin Burns decided that he had produced the ultimate golf putter.

In 1996, Kevin traveled to four West Coast PGA tournaments, sneaking into locker rooms and holding lengthy discussions with pro golfers. By placing a few putters into the hands of some top-flight pros, it only took three tournaments to establish his first PGA win: the 1996 Nissan Los Angeles Open. With this success in the record books, January of 1997 saw Mr. Burns hiring a full-time tour representative, Eric Brown, to market his exclusive product. Now the mouse was playing in the lion’s den, competing against major companies that were paying tour players to use their putter line. 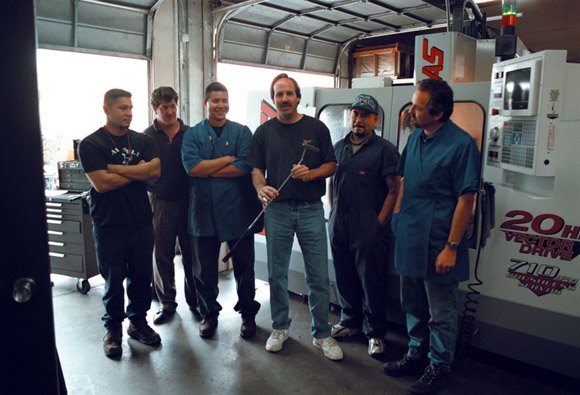 Word of mouth saved KB Golf the expensive task of buying allegiance amongst the pros. By the end of ’97 there was a tour win (The Greater Vancouver Open), as well as four second-place finishes, three third-place finishes, 21 top-ten finishes and two U.S. Ryder Cup appearances. More noteworthy, the Darrell Survey, which surveys professionals to see which clubs they have in their bags on the first tee, found the Burns putter to be the number four putter, preceded only by Titleist, Odyssey and Ping.

In route to fulfilling his dream, Kevin plunked his money down on a used Haas VF-1 vertical machining center in 1993. That machine, number 1083, is now affectionately known as “Bambi” in the shop. Three years later, in 1996, another VF-1 was purchased, and the two machines now produce an expanded production run of one of the highest quality putters ever designed. The addition of two Haas VF-3s, one in ’97 and another in ’98, completes the contemporary production line.

In 1998, the sales and successes of Kevin’s milled putters accelerated tremendously. A win at the Bob Hope Chrysler Classic, and five top-ten PGA tour finishes in the first six months, justified a production run of 800 putters per month. By July ’98, the production run had increased to 1,500 putters per month. With all orders prepaid by distributors and an asking price of $350 a unit, capital worries have flown south for KB Golf. In fact, another three Haas mills may soon adorn the shop if space can be created.

Constructed of carbon steel and 303 stainless, seven operations are necessary for the production of the eight models of putters produced by KB Golf. The initial cut is one inch wide and .200″ deep. A single pass at 15 inches per minute is made with a 3/4-inch-diameter hog mill at a spindle load of 45%. This maximizes the tool’s efficiency without jeopardizing the tool itself. Options that KB Golf elected for their Haas mills are a chip auger, rigid tapping, programmable coolant nozzle, tool management alarm and macros, and the engraving package. KB uses the latter (engraving) to carve Kevin Burns’ signature into each putter. An artist then lacquers the signature by hand. This attention to detail truly distinguishes the Kevin Burns Signature Series from any of its competitors. Truth of the matter is, there is only one other handmade putter in the marketplace, the remainder are stock castings with none of the balance or feel provided by these custom-designed putters. 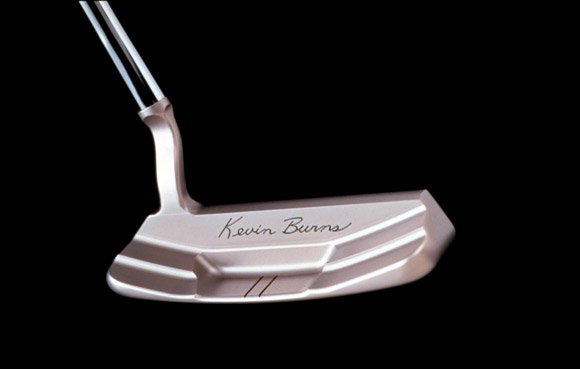 According to Kevin, professional golfers like aggressive putting, and the special softness of his putters (there is a copper insert in the putting head) has struck a nerve with many of the playing elite. Kevin has four past Masters champions playing with his putters. Professionals demand a carefully finished product, and the utilization of Haas mills has fulfilled the highest expectations of players and staff alike.

Jerome Sorich, shop super-intendent, had this to say about the exclusive use of Haas mills, “I’ve worked on Mazak, Matsura, Fadal . . . and Haas is as trouble free as any. You don’t have to spend a million dollars to have reliable machining; our reliability has been outstanding . . . they (Haas) don’t break down!”

Jerome has inherited the research and design program at KB Golf, which relies on a CAD program that is integrated with the older VF-1. All the experimental cuts are performed on the older machine – this is its only role. It should also be noted that all of the jaws that hold parts are custom made. Assisting Jerome in production are John Bunuelos, Blair Phelps, Joe Gutierrez and Pete Dimas.

Obviously, the golf world is on notice – KB Golf is distributing its putters in the United States, Europe, Malaysia, India, Japan, Hong Kong and Singapore. Sixty percent of all production is sold in the good ol’ US of A, and the remaining 40 percent is foreign. But more notable is the special market niche Kevin Burns has created with intent. Were this putter a car, it would be a Ferrari, a Porsche. . . were it a liquor, it would be a Chivas Regal, a Jack Daniels . . . the high end, the premier, call it what you want, the Kevin Burns Signature Series of putters is the ultimate market phenomena . . . a special area of demand created by a superior product. What’s not to like?