Size Matters. (But not the way you might think.)

In the first floor room of a small, unassuming end-of-block industrial unit on the outskirts of Johannesburg, Andre Baird fires up a miniature jet turbine mounted on a miniature test-bed by an open window.

It may only be “ticking over,” but standing next to it, Baird’s creation seems just as ear-splittingly loud as a full-size version. When he hits the throttle, I may as well not be wearing ear defenders.

With a grin, Baird holds the rev’ gauge up for me to see the LED numbers jump to a staggering 120,000 rpm. Just as 12 kg of thrust forces the test-bed to start creeping forward – but before the banshee breaks its mounting and embeds itself in the wall opposite – he pokes the kill switch, much to my relief and, I suspect, that of the neighbours. 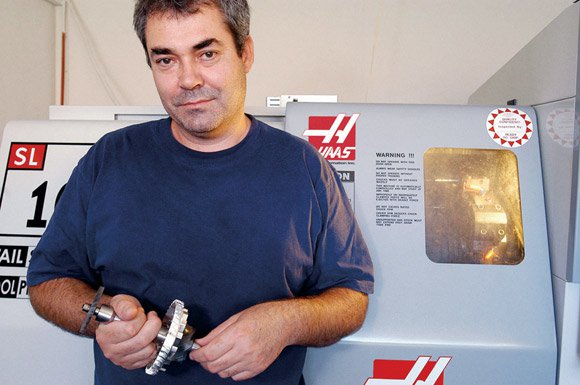 Before starting his company in 1998, Andre Baird made a living as a professional IT and electronics engineer. In his spare time he built radio-controlled model aircraft. The company, he claims, was started as “a hobby” – an outlet for his pent-up desire to make something.

“The original intention was to build one of the best model turbines available,” he says. “I wanted to combine my hardware and software knowledge into one product. The turbine idea seemed like a good one.”

And indeed it was. Just a few years on and Baird Micro Turbines is shipping its miniature power plants to enthusiasts all over the world.

But, before it could do so, there were a few engineering problems to overcome. Despite the small scale of the product, some of them were large-scale challenges. 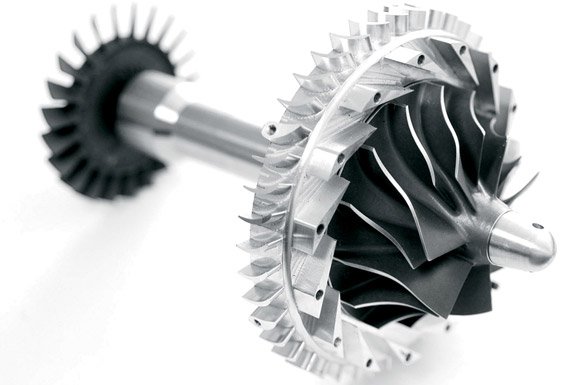 Originally, Baird Micro Turbines – like many small start-up companies – never had any intention of undertaking its own machining. The plan was to “farm out” most of the actual manufacturing, and concentrate on the design and development of the product.

“That didn’t really work out,” Baird says. “In the early days, we had to make a lot of prototypes – high-precision prototypes, at that. Most of the subcontract companies we approached weren’t really interested. One-off prototypes are expensive to produce and time-consuming. These guys had other priorities, and we often found ourselves at the back of the queue.”

Frustrated, Baird considered buying his own CNC machines and doing the work in-house. On the face of it, not such a big deal for someone of his technical ability, but never having programmed a CNC before, he was understandably cautious.

“We looked around for something that was simple to program and operate, but very productive, precise and reliable,” he says.

And it had to be small, too; the company’s ground floor office/workshop measures less than 20 square meters.

“We bought a Haas Mini Mill CNC machining centre,” Baird says, “because it met all of our criteria, and it had a lot of performance for a machine of its size.”

“It’s small,” says Baird, “so we were able to squeeze it in without too much trouble. It’s also very easy to use. We were running it the same day it was installed.”

“By investing in these two machines we became pretty much self-sufficient in parts manufacture and for prototyping,” says Baird. “The ability to do R&D on the premises is a great advantage. Apart from saving time, we can also ensure that the manufacturing procedures we’ve developed are used. For example, we’ve put a lot of thought into how we hold a part while it’s being machined. This directly affects the quality of the component. If it’s held incorrectly you can introduce stresses and distortions, which will cause it to fail.”

When parts are spinning up to 120,000 times a minute, stresses and distortions can have spectacular consequences.

“We’re working to high tolerances, too,” Baird adds. “We wanted more control over those tolerances. We used to get parts back, test them and find that they hadn’t been machined to our specified tolerances. It was a waste of time and money.”

One of Baird’s biggest challenges was perfecting the fuel supply to the turbine.

On a full-scale engine, the fuel is often supplied by gear-driven pumps. Because weight is much more critical on a model aircraft, the fuel has to be delivered via injectors. To achieve the target of 20 grams of atomised fuel a minute, the company had to design and manufacture extremely fine injectors: a task that, ordinarily, wouldn’t be attempted on a CNC milling machine.

“When we did some research into the very accurate mist injection we would need, we found that other manufacturers were either making the injectors by hand or were using some kind of etching system. I wasn’t convinced that we couldn’t do it using a milling machine.”

Through a specialist supplier in Germany, Baird obtained a selection of very small diameter drills – some as fine as 0.2 mm!

“We set the Haas Mini Mill up to do the job, and I’m happy to say, we’ve had 100 percent success! Of course, we break a drill occasionally, but far fewer than you might imagine.”

Baird claims that the development process was made quicker by the fact that the company had the machines in-house.

“Having our own machines meant we were able to constantly try new designs,” he says. “We could machine a new part, try it, and make any modifications quickly and with minimum expense.”

No matter how fascinating and appealing a finely engineered mini-turbine is at ear-splitting full throttle, the market for Baird’s creations is small, even on a global basis.

“Most of the demand for our product comes from the USA and Europe,” he says. “It’s steady demand, but it’s never going to be enough to enable us to grow to any great extent.”

The key to the company’s future is more likely to be found in what it has learnt from designing and building its jet engines. Baird talks enthusiastically about a number of big, multi-national companies that he’s in contact with, and how his mini-turbines can be used in “real-life” applications.

“For starters, defence companies are interested in using them in small, pilot-less drone aircraft,” he says. “They’re also considering them for use in missiles, which traditionally use comparatively inefficient rockets.”

Clearly, Baird Micro Turbines is an organisation in transition: from start-up hobby-shop to fledgling aerospace company.