From Crude to Rude

When Gary Turner flashed his TIG welder into action to fuse together a 4130 CroMo alloy motocross frame for his son’s racing efforts, he had little idea that he was sparking the start of a bicycle company that would someday carry leading riders to victory after trophy-snatching victory.

Historians agree that cycling’s past stretches back some 200 years to the time when crude, two-wheeled “hobby horses” were shuffled about the countryside by the wealthy young men of England. Crude as they were, these wood-framed contraptions soon led to the development of cycles pedaled via a crank attached to the front axle. Incremental advancements in design and style such as this have long been the norm in the world of bicycling.

Today, GT Bicycles, Inc., “pedals” its product in 69 countries around the world, with more than 140 models currently available ranging from bicycle motocross (BMX) bikes to road bikes to mountain bikes. Aggressively expanding the bicycle performance envelope with high-tech materials, tradition-breaking designs and advanced construction techniques, GT is a leader in two-wheeled technology. Where the common bicycle once fit the needs of the many, enthusiasts and competitors alike now demand a wide variety of choices at various price points. Some serious riders go so far as to maintain a stable of bikes, one to meet each riding style or event in which they may compete.

To meet the diverse demands of today’s riders, GT modified its manufacturing techniques and responded with bicycle frames made of steel, aluminum and titanium alloys, as well as the latest carbon-fiber composites. Haas CNCs play an important part in this design revolution, with GT using versatile machining centers in both the main plant and off site at Innovative Metal Designs (see CNC Machining, Fall 1998). 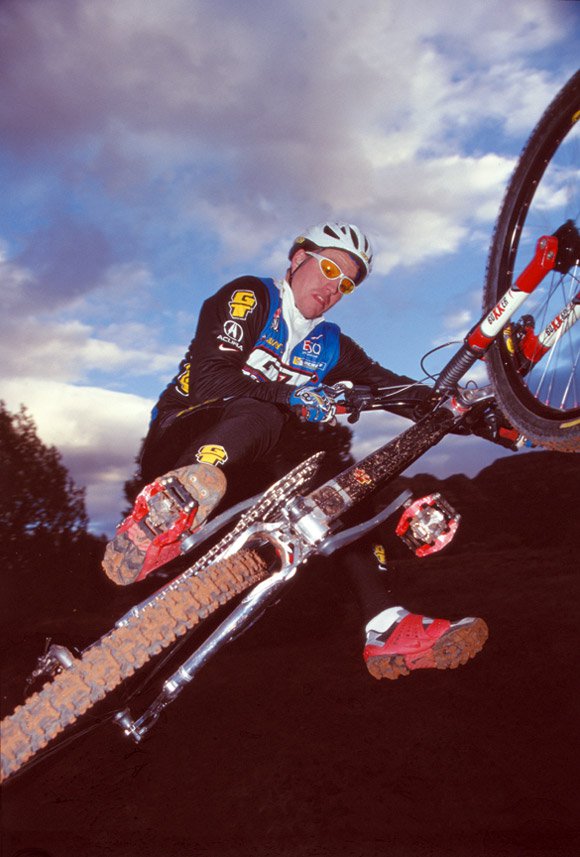 GT Bicycles has flourished on a policy of heavy participation in competitive events that test the extreme limits of the bicycle. This constant high-profile involvement in competition includes all forms of freestyle aerobatic stunting, BMX racing and downhill events. But to win big – and “Team GT” can claim a string of World Cup victories and championships, in addition to 16 consecutive team titles in BMX competition – advancements in technology must be frequent and fanatically supported by both the designers and members of Team GT itself. But these advancements don’t come cheap. In 1997 alone, GT invested more than $2.5 million in research and development.

GT recently moved to a new facility in Santa Ana, California. “The relocation was necessary to improve our operational efficiencies,” says Tom Mason, president and chief executive officer of GT Bicycles. “By consolidating GT’s manufacturing, warehouse and product development functions into one site with increased square footage, we have been able to bring more production and assembly functions in-house. These include automated wheel-building and CNC machining. Our goal is to increase the amount of assembled product built in-house by about 50 percent for the 1999 product line.”

GT presently runs a VF-4 equipped with a “side-by-side” manual pallet system to mill frame parts such as the bottom bracket crank housings. The operator can load and fixture a pallet of parts while the other pallet is inside the Haas being machined. This increases output significantly, because all nonmachining tasks are done outside of the machine cutting area.

For 1999, GT Bicycles introduced an all-new dual suspension design called the GT i-drive four-bar link system. Though GT is already recognized as the leader in dual suspension – both front and rear wheels feature fully-articulated suspension with up to six inches of travel and shock absorbers to dampen the jarring effects of rough terrain – this revolutionary concept promises to transfer more rider energy to the ground than any other crank model on the market. 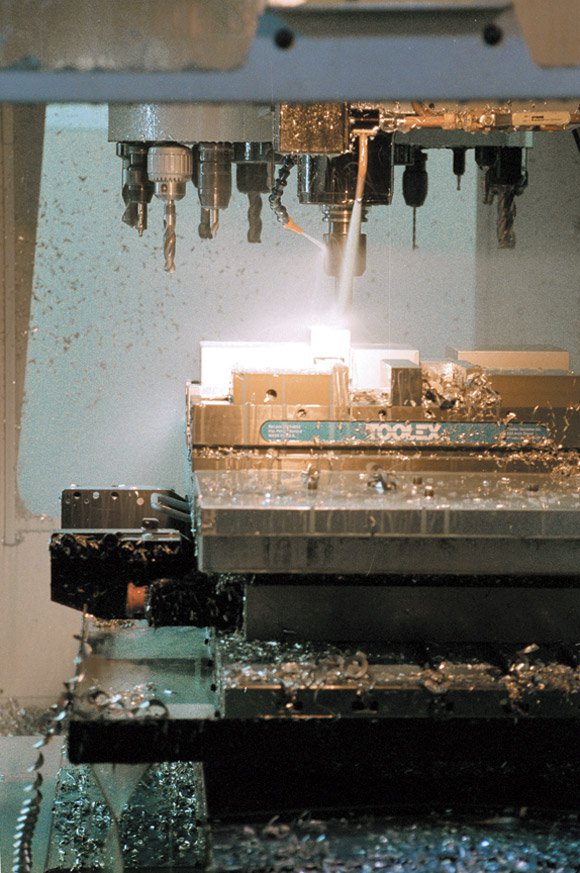 Ever since the development of full-suspension mountain bikes, the industry has been challenged by the ever-pervasive problem of pedal-induced “bio-pacing,” a jerking motion that occurs throughout the chain while the suspension is active. This results in a disruption of the pedal stroke, forcing the rider to work harder to maintain a steady cadence.

GT’s innovative solution revolves around the design of their new i-drive system. The i-drive four-bar link system isolates the crank, and thus the pedals and feet, from the frame’s suspension or terrain input, while creating constant, uninterrupted tension throughout the chain. This means the bike can be ridden more aggressively one or even two gears higher than other bikes on any given terrain.

At GT, the goal is to build every part lighter yet stronger. This calls for the ultimate in design and machining skills to achieve these weight cuts without sacrificing structural reliability. Once the perfect balance of mass and design is arrived at, the machinist must be able to duplicate the design time and time again to ensure that part failures do not lead to the dreaded DNF (Did Not Finish), or even worse, a rider injury. This is where the Haas machining center delivers repeatable perfection, the perfection Team GT trusts when racing downhill on the edge of control, the same perfection team riders can depend on while flying through the air and wondering if their bike will survive yet another landing. It’s teamwork that delivers perfection, from the designer, to the machinist, to the rider; and the records prove that GT Bicycles is doing it right – consistently!